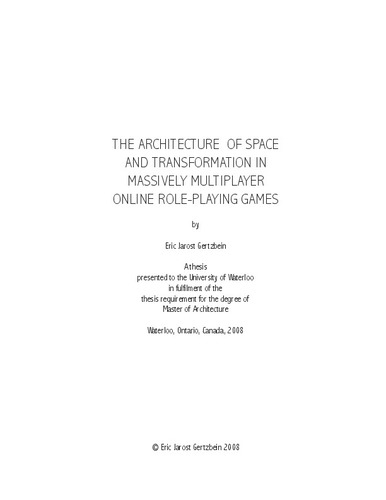 This thesis examines the architecture and space simulated in massively multiplayer online role-playing games (MMORPGs) and argues that the hand which guides the design of virtual architecture and space in these games originates from the same primogenitor of traditional mythology. The simulation of the game-world and the performance of in-game elements which include, avatars, player characters, non-player characters (NPCs), and artifacts, is regulated by the semantics of an in-game narrative that maintains a core structure of hierarchical spaces and traditional and modified architectural paradigms. Hierarchical spaces and architectural interventions are used to curate a mythologically derived model of personal transformation known as the ‘Hero Cycle’ that is based on hermeneutic principles whereby the identity of the collective is required to understand the identity of the individual. As a result, this cycle of personal transformation relies on the integration of the individual with the collective and is a revitalizing process within society. While it is believed that contemporary (computer) role-playing games (RPGs) are built on the shoulders of early pen and paper (PNP) role-playing games, both the early PNP and later RPGs are in fact founded on principles of ritual movement through space, developed by traditional mythology to enact Hero Cycles and by ritualized religious worship, to symbolically enact mythology. Role-playing games can bring forth the benefits of the experience of mythological progenitors of cultural narratives and religious theology. In-game, a narrative is presented to players as the face of the collective identity of the game-world and incorporates many traditional (and modified) iconographic and architectonic typologies that support the semantics of game-play and the theology that ties the game-mechanics to the narrative.