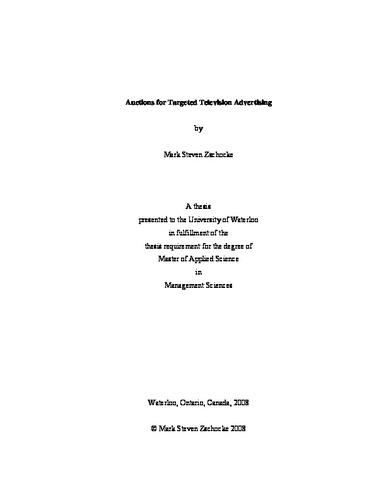 Television advertising is a billion-dollar industry in the United States. Currently, advertisers place their messages in television programs that are estimated to have a high proportion of their target demographic viewers. The advertising spots are usually purchased months in advance at set list prices or at negotiated prices. Technologies that can place advertisements at the cable box level, instead of the program level, will provide advertisers with the ability to target any demographic group directly and in real-time. This thesis explores the new decision-making required by this new technology and how the television advertisement space can be sold more effectively. In particular, it compares a list price system to a number of new auction models. The structure of the auctions for the new targeted television advertising system is unique and has not been previously studied in the literature. This thesis explores new auction models that can capture these unique features and lead to desirable results for the seller of the advertisement space. A simplified analytical model shows how these features impact advertisers’ bidding behavior and how a list price system compares to the auction models in the ability to raise revenue for the seller of the advertising space. These issues are then explored under various market settings with differing numbers of advertisers and value distributions that these advertisers have for the advertising space. Since sequential first price auctions have undesirable consequences such as strong price fluctuations, this work focuses on second price auctions. The Vickrey-Clarke-Groves (VCG) mechanism is customized for this problem by developing an optimization formulation that determines the best set of advertisers for a particular advertisement space. Because execution time may be an issue, other auction models are developed that lead to similar outcomes as the VCG mechanism but require less computational effort. This thesis provides guidance on when a list price system will lead to higher expected revenue than an auction model and vice versa in a targeted television advertising system. It also demonstrates why some of the standard auction models cannot be applied to this problem and what type of new models are required to lead to desirable advertising outcomes.