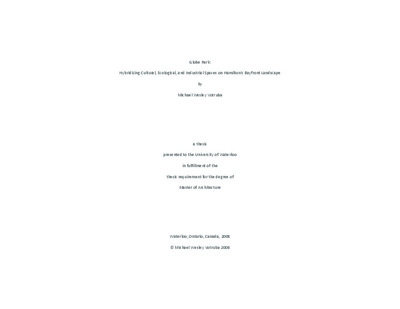 Applying complex ecosystems theory, this thesis maps and analyzes the codependency of ecological and manufacturing flows affecting cities, the landscape, and the environment. Learning from this analysis, a prototype for a hybrid eco-manufacturing and urban park is proposed on degraded industrial lands. Its design is influenced by eco-industrial parks including Kalundborg and contemporary urban parks including La Villette, Downsview, and Fresh Kills. The prototype’s design is motivated by the mutating spatiality caused by contemporary trends in North American manufacturing and the degrading environmental state of the Great Lakes. The horizontal expansion of post-Fordist industrial areas on the urban periphery of North American cities has helped lead decentralization of core urban areas. This organization is becoming vulnerable to future energy and environmental concerns. In Hamilton, this trend has resulted in approximately 3,400 acres of underutilized contaminated land in its historical bayfront industrial areas. The hybrid park prototype will incubate reuse of a 576 acre site within this land by creating a network of eco-operations and public spaces. As part of North America’s Great Lakes, Hamilton Harbour drains into the head of Lake Ontario. The Port of Hamilton’s manufacturing activity strains the ecological systems of these lakes. Some of the most problematic discharge into Hamilton Harbour occurs at Windermere Basin. The basin is surrounded by a twilight industrial area that contaminates its water, soil, and air. This will be the location of the hybrid park prototype. Light manufacturing spaces that treat industrial contamination will be designed. Their organization will hypothesize a new form of urbanization based on environmentally benign uses of energy and materials.