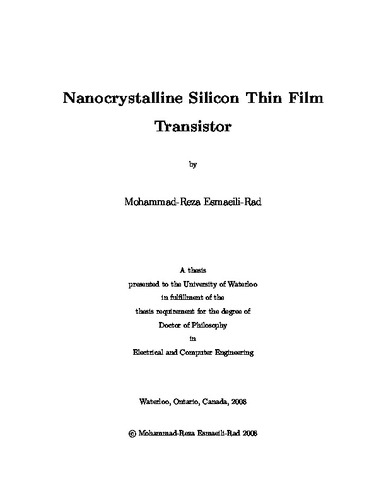 Hydrogenated amorphous silicon (a-Si:H) thin film transistor (TFT) has been used in active matrix liquid crystal displays (LCDs) and medical x-ray imagers, in which the TFT acts as pixel switches. However, instability of a-Si:H TFT is a major issue in applications where TFTs are also required to function as analogue circuit elements, such as in emerging organic light emitting diode (OLED) displays. It is known that a-Si:H TFT shows drain current degradation under electrical operation, due to two instability mechanisms: (i) defect creation in the a-Si:H active layer, and (ii) charge trapping in the gate dielectric. Nanocrystalline silicon (nc-Si) TFT has been proposed as a high performance alternative. Therefore, this thesis focuses on the design of nc-Si TFT and its outstanding issues, in the industry standard bottom-gate structure. The key for obtaining a stable TFT lies in developing a highly crystalline nc-Si active layer, without the so-called amorphous incubation layer. Therefore, processing of nc-Si by plasma enhanced chemical vapor deposition (PECVD) is studied and PECVD parameters are optimized. It is shown that very thin (15 nm) layers with crystallinity of around 60% can be obtained. Moreover, it is possible to eliminate the amorphous incubation layer, as transmission electron microscope (TEM) images showed that crystalline grains start growing immediately upon deposition at the gate dielectric interface. The nc-Si TFT reported in this work advances the state-of-the-art, by demonstrating that defect state creation is absent in the nc-Si active layer, which is deduced by performing several characterization techniques. In addition, with the proper design of the nitride gate dielectric, i.e. by using a nitrogen-rich nitride, the charge trapping instability can be minimized. Thus, it is shown that the nc-Si TFT is much more stable than the a-Si:H counterpart. Another issue with nc-Si TFT is its high drain leakage current, i.e. off-current. It is shown that off-current is determined by the conductivity of nc-Si active layer, and also affected by the quality of the silicon/passivation nitride interface. The off-current can be minimized by using a bi-layer structure so that a thin (15 nm) nc-Si is capped with a thin (35nm) a-Si:H, and values as low as 0.1 pA can be obtained. The low off-current along with superior stability of nc-Si TFT, coupled with its fabrication in the industry standard 13.56 MHz PECVD system, make it very attractive for large area applications such as pixel drivers in active matrix OLED displays and x-ray imagers.