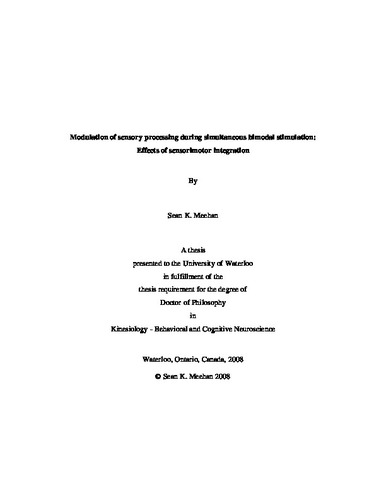 Illusions such as the McGurk (McGurk and MacDonald, 1976) and ventriloquist (Radeau and Bertelson, 1974) effects or visual capture sensorimotor deficits (Holmes et al., 2004) demonstrate that our perception of and interaction with our environment is shaped by our ability to extract and integrate relevant sensory inputs across multiple modalities. Physiologically extraction occurs through a mechanism that facilitates relevant sensory representations and/or suppresses irrelevant ones within secondary sensory cortices, areas traditionally viewed as “modality-specific” cortex. This mechanism is commonly called “attention”. The purpose of the current thesis is to investigate the influence of motor requirements upon attentional modulation of sensory processing. It was hypothesized that different task demands associated with sensory processing for continuous movement rather than perception would result in earlier loci and/or different mechanisms of attentional modulation. Two studies used functional magnetic resonance imaging (fMRI) to investigate intermodal influences between a vibrotactile and visuospatial stimulus during a continuous sensorimotor task. These studies revealed that attention to vibrotactile stimulation guiding a continuous movement resulted in decreased activation in primary somatosensory cortex (S1) relative to when the same stimulus was an irrelevant distracter. This was regardless of the spatial or temporal properties of the two modalities. In a third study, somatosensory evoked potentials (SEPs) demonstrated that somatosensory processing is influenced as early as arrival to S1 from thalamic-cortical projections, however, SEPs did not demonstrate decreased activation during vibrotactile tracking. A fourth study using transcranial magnetic stimulation (TMS) confirmed differential excitability of S1 dependent upon whether the same sensory stimulus was used for perception or to guide a continuous sensorimotor transformation. Finally, a fifth study using behavioral measures demonstrated that the intramodal signal to noise ratio is an important factor in determining intermodal influence. This thesis provides insight into the influence of motor requirements upon sensory processing and demonstrates its importance in understanding how information is extracted from our environment. Understanding this has important implications for the interpretation/development of future work investigating intermodal influences upon sensory-processing.