On Fault-based Attacks and Countermeasures for Elliptic Curve Cryptosystems 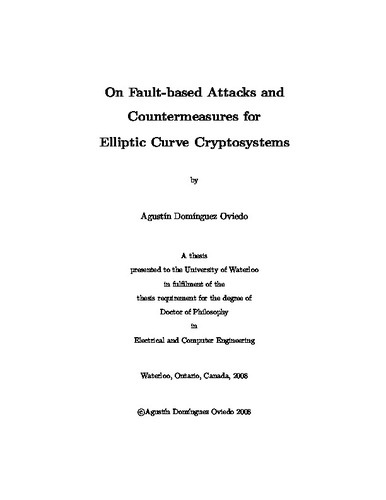 For some applications, elliptic curve cryptography (ECC) is an attractive choice because it achieves the same level of security with a much smaller key size in comparison with other schemes such as those that are based on integer factorization or discrete logarithm. Unfortunately, cryptosystems including those based on elliptic curves have been subject to attacks. For example, fault-based attacks have been shown to be a real threat in today’s cryptographic implementations. In this thesis, we consider fault-based attacks and countermeasures for ECC. We propose a new fault-based attack against the Montgomery ladder elliptic curve scalar multiplication (ECSM) algorithm. For security reasons, especially to provide resistance against fault-based attacks, it is very important to verify the correctness of computations in ECC applications. We deal with protections to fault attacks against ECSM at two levels: module and algorithm. For protections at the module level, where the underlying scalar multiplication algorithm is not changed, a number of schemes and hardware structures are presented based on re-computation or parallel computation. It is shown that these structures can be used for detecting errors with a very high probability during the computation of ECSM. For protections at the algorithm level, we use the concepts of point verification (PV) and coherency check (CC). We investigate the error detection coverage of PV and CC for the Montgomery ladder ECSM algorithm. Additionally, we propose two algorithms based on the double-and-add-always method that are resistant to the safe error (SE) attack. We demonstrate that one of these algorithms also resists the sign change fault (SCF) attack.