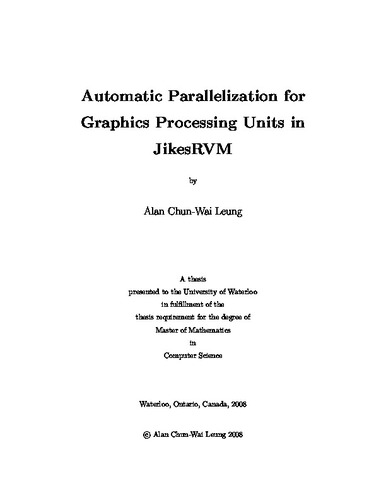 Accelerated graphics cards, or Graphics Processing Units (GPUs), have become ubiquitous in recent years. On the right kinds of problems, GPUs greatly surpass CPUs in terms of raw performance. However, GPUs are currently used only for a narrow class of special-purpose applications; the raw processing power available in a typical desktop PC is unused most of the time. The goal of this work is to present an extension to JikesRVM that automatically executes suitable code on the GPU instead of the CPU. Both static and dynamic features are used to decide whether it is feasible and beneficial to off-load a piece of code on the GPU. Feasible code is discovered by an implementation of data dependence analysis. A cost model that balances the speedup available from the GPU against the cost of transferring input and output data between main memory and GPU memory has been deployed to determine if a feasible parallelization is indeed beneficial. The cost model is parameterized so that it can be applied to different hardware combinations. We also present ways to overcome several obstacles to parallelization inherent in the design of the Java bytecode language: unstructured control flow, the lack of multi-dimensional arrays, the precise exception semantics, and the proliferation of indirect references.