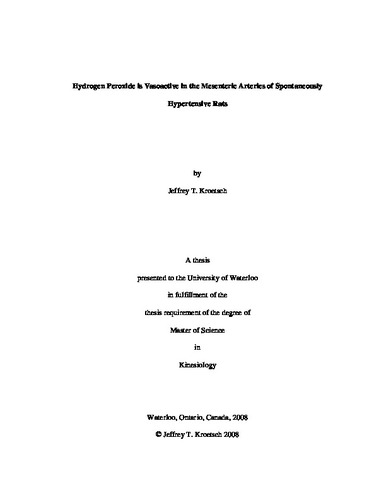 It is well established that hypertension decreases endothelium-dependent vasomotor function, partially by excessive generation and reduced scavenging of reactive oxygen species (ROS). Nevertheless, at appropriate levels, some ROS can act as signaling molecules in the vasculature and contribute to endothelium-dependent dilation. Recent evidence in healthy resistance arteries suggests that the ROS species hydrogen peroxide (H2O2) acts as an endogenous endothelium-dependent dilator through a non-nitric oxide, non-prostaglandin (3NP) pathway. The aim of this study was to investigate the role of endogenous H2O2 in 3NP-mediated endothelium-dependent dilation of rat mesenteric arteries, and the changes that occur in these vessels with essential hypertension. 18-20wk old male spontaneously hypertensive rats (SHR; n=24) had an elevated systolic blood pressure of 198±6mmHg compared to 93±4mmHg (p<0.001) in the age matched normotensive Wistar-Kyoto rat (WKY; n=22). Isolated mesenteric arteries were preconstricted with norepinephrine (NEPI), followed by exposure to increasing doses of the endothelium-dependent dilator acetylcholine (ACh), which revealed vasomotor dysfunction in the SHR (maximal dilation: WKY: 94.8±1.3% vs. SHR: 75.2±2.9%, p<0.001). Incubation of the vessels with the non-specific cyclooxygenase (COX) inhibitor indomethacin (INDO) restored the ACh response in the SHR to the level of the WKY control (area under the curve: WKY: 354.6±8.6 vs. SHR INDO: 350.2±12.2, p>0.05) indicating that the release of constrictory prostaglandins from COX contribute to endothelial vasomotor dysfunction. Co-incubation of vessels with INDO and the nitric oxide synthase inhibitor Nω-nitro-L-arginine (LN) inhibited dilation in SHR (46.2±4.8%, p<0.001) but not in WKY (98.3±1.5%, p>0.05), indicating an elevated 3NP component in WKY over SHR. Further co-incubation with the H2O2 scavenger catalase (CAT), LN, and INDO inhibited the 3NP component to a greater extent in SHR (29.7±3.1%, p=0.062) than in WKY (91.6±2.5%, p<0.05). The responses of SHR and WKY mesenteric arteries to the endothelium-independent dilator sodium nitroprusside, the receptor-mediated constrictor NEPI, and the electrochemical constrictor KCl were no different between LN INDO and CAT LN INDO conditions. These data suggest that endogenous H2O2 has a greater role in mediating endothelium-dependent dilation in the mesenteric resistance arteries of SHR. Interestingly, in SHR, co-incubation with LN INDO improved dilation over LN alone (46.2±4.8% vs 23.3±3.2±, p=0.001), and CAT LN INDO decreased dilation from LN INDO to a similar extent, suggesting that COX-inhibition could be a source of H2O2 for endogenous vasodilation. Western blotting revealed a 54% increase in COX-1 protein expression in the SHR mesenteric arteries (WKY: 1.00±0.18 (n=9) vs. SHR: 1.54±0.17 (n=13), p<0.05), but no difference in the expression of the pro-oxidant enzyme p47phox, and the anti-oxidant enzymes CAT, SOD-1, and SOD-2. Administration of exogenous H2O2 to NEPI preconstricted mesenteric arteries revealed a dose-dependent dilation that was no different between SHR and WKY, and incubation of isolated WKY and SHR mesenteric arteries with CAT reduced the accumulation of H2O2 to a similar extent, as assessed by the H2O2-specific fluorescent dye Amplex Red. In conclusion, endogenous H2O2 is a vasodilator in the mesenteric arteries of SHR and WKY rats in the absence of nitric oxide and prostaglandins. In the SHR, COX-1 inhibition may allow endogenous H2O2 to become bioavailable for vasodilation. This study is the first to show a role for endogenous H2O2 in maintaining endothelium-dependent dilation in hypertensive rat resistance arteries, and provides evidence to support a role for COX-1-inhibition in the increased availability of H2O2 for dilation.