Interaction of Nanosecond and Femtosecond Laser Pulses with Carbon: Deposition of Carbon Films having Novel Compositions 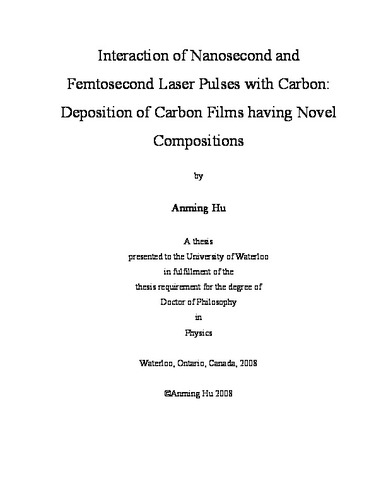 A comparison of the composition and structure of carbon films deposited by ns and fs laser ablation of graphite is the subject of this thesis. In addition, the effect of irradiation on the surface of graphite has been investigated in detail. Laser-induced phase transitions from graphite to sp-bonded carbon and trans-polyacetylene chains as well as the formation of nano-diamond have been observed after irradiation with fs pulses. An optical orientation mechanism involving both electric and magnetic interactions is proposed to understand the formation of nano-stripes and other structures on irradiated graphite surfaces. These phenomena are not observed after nanosecond laser irradiation. Tetrahedral carbon (ta-C) films deposited at cryogenic temperatures using ns laser radiation consist of sub-micron graphitized grains embedded in a matrix of sp3-hybridized bonded carbon. Nano-buckling is evident in ta-C films deposited by fs ablation where the composition is found to consist of mixed sp, sp2, and sp3 – hybridized carbons species. It is found that the concentration of sp-bonded chains is negligible in ns-C films. Surface enhanced Raman spectroscopy has been used to characterize molecular species in ns and fs carbon films. Time of flight mass spectroscopy has been used to study plume species produced by laser ablation. It is also found that polyyne molecules can be formed by fs laser dissociation of small molecules in organic solvents. This process is accompanied by the deposition of hexagonal nano-diamond films on substrates placed near the laser focus during irradiation. This opens a new path in the synthesis of 1D conducting molecules and nano-diamond materials for nano-science applications. Quantum chemical calculations involving density functional theory (Gaussian '03) have been carried out in support of this work and have been used to study Raman and IR vibrational modes of several novel carbon molecules synthesized in ta-C films and in the liquid phase. These studies have been extended to assist in the identification of astronomical spectra.