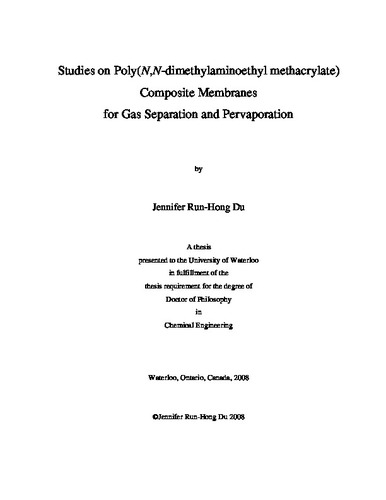 Membrane-based acid gas (e.g., CO2) separation, gas dehydration and humidification, as well as solvent dehydration are important to the energy and process industries. Fixed carrier facilitated transport membranes can enhance the permeation without compromising the selectivity. The development of suitable fixed carrier membranes for CO2 and water permeation, and understanding of the transport mechanism were the main objectives of this thesis. Poly(N,N-dimethylaminoethyl methacrylate) (PDMAEMA) composite membranes were developed using microporous polysulfone (PSF) or polyacrylonitrile (PAN) substrates. The PDMAEMA layer was crosslinked with p-xylylene dichloride via quaternization reaction. Fourier transform infrared, scanning electron microscopy, adsorption tests, and contact angle measurements were conducted to analyze the chemical and morphological structure of the membrane. It was shown that the polymer could be formed into thin dense layer on the substrates, while the quaternary and tertiary amino groups in the side chains of PDMAEMA offered a high polarity and hydrophilicity. The solid-liquid interfacial crosslinking of PDMAEMA led to an asymmetric crosslinked network structure, which helped minimize the resistance of the membrane to the mass transport. The interfacially formed membranes were applied to CO2/N2 separation, dehydration of CH4, gas humidification and ethylene glycol dehydration. The membranes showed good permselectivity to CO2 and water. For example, a CO2 permeance of 85 GPU and a CO2/N2 ideal separation factor of 50 were obtained with a PDMAEMA/PSF membrane at 23oC and 0.41 MPa of CO2 feed pressure. At 25oC, the permeance of water vapor through a PDMAEMA/PAN membrane was 5350 GPU and the water vapor/methane selectivity was 4735 when methane was completely saturated with water vapor. On the other hand, the relative humidity of outlet gas was up to 100 % when the membrane was used as a hydrator at 45oC and at a carrier gas flow rate of 1000 sccm. For used for dehydration of ethylene glycol at 30oC, the PDMAEMA/PSF membrane showed a permeation flux of ~1 mol/(m2.h) and a permeate concentration of 99.7 mol% water at 1 mol% water in feed. This work shows that the quaternary and tertiary amino groups can be used as carriers for CO2 transport through the membrane based on the weak acid-base interaction. In the presence of water, water molecules in the membrane tend to form a water "path" or water "bridge" which also help contribute to the mass transport though the membrane. In addition, CO2 molecules can be hydrated to HCO3-, which reaction can be catalyzed by the amino groups, the hydrated CO2 molecules can transport through the water path as well as the amino groups in the membrane. On the other hand, for processes involving water (either vapor or liquid) permeation, the amino groups in the membrane are also helpful because of the hydrogen bonding effects.