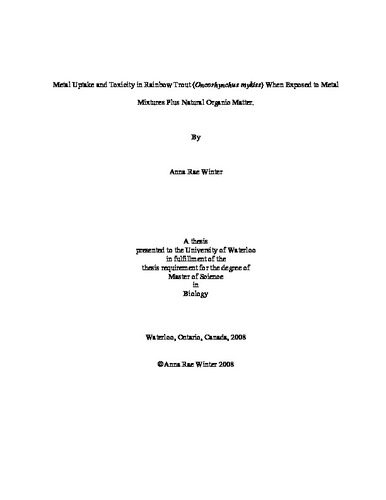 Multiple metal-gill modelling based on the toxic unit concept suggests that metals with the same toxic actions (e.g. Pb and Cd interacting at Ca-gill channels) will exhibit strictly additive binding at the gills of fish if the concentrations of the two metals sum to one toxic unit. Due to the non-linear nature in which metals bind to fish gills, the metal mixture will be more than additive below one toxic unit and less than additive above one toxic unit. This research tested the models by exposing rainbow trout to mixtures of Cd and Pb to investigate the metal-gill binding of these two metals when present in mixtures with fish. The relationship between Cd and Pb in mixtures was also investigated when natural organic matter (NOM) was added to the treatment solutions. Juvenile rainbow trout (5 g) were exposed to equal mixtures of Cd and Pb at 0.75, 1.5, 2.25 and 3.0 µM each. The high gill-Pb accumulation in relation to gill-Cd was unexpected and suggested an additional gill-binding site for Pb aside from the apical Ca channels on the gill. 96 h toxicity experiments revealed that Cd and Pb in mixtures were more toxic than either Cd or Pb alone. The bioaccumulation and partitioning of Cd and Pb within the body of 50 g rainbow trout was investigated when these fish were exposed to mixtures of Cd and Pb. The accumulation of metals within the trout body did not change between the single metal and mixture exposures. To investigate how Pb affects Cd binding to fish gills, and how these metals exert toxicity when present in mixtures, trout (2 g) were exposed to a range of Cd concentrations (0.75, 1.5, 2.25 and 3.0 µM) while maintaining constant Pb concentrations over the same concentration range. Gill binding results revealed that Pb reduced or inhibited gill-Cd binding. With the addition of NOM, this inhibition was lost. LT50 results for fish exposed to metal mixtures for 96 h revealed that without NOM, the mixture toxicity was dependent on Pb concentration. With the addition of NOM, mixture toxicity decreased with increasing Pb.