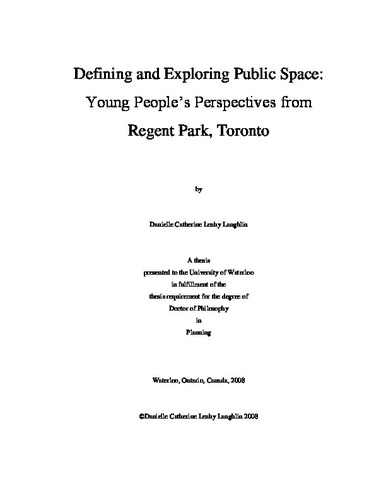 Young people have not traditionally had a voice in urban planning. More often than not, they are incorporated into planning by either considering them as an implicit population or as part and parcel of planning for families (Knowles-Yanez, 2002; Freeman and Aitken-Rose, 2005; Frank, 2006). This is now recognized as one of the shortcomings of urban planning. This study seeks to address this gap within a specific context of urban revitalization and public space within a public housing development. This study explored how young people between the ages of 10 and 16 living in Regent Park, Toronto define and value local public spaces. Their perspectives are particularly relevant at this time as their neighbourhood is in the process of a 15-year, multi-million dollar revitalization plan. This plan will bring about extensive physical and social changes to the neighbourhood. The key objectives of this study were to understand the perspectives of young people about their neighbourhood public space, to determine how young people’s perspectives match with revitalization plans and to adapt participatory research methods appropriate for young people. By using a participatory, multi-method approach, I set out to determine how young people understand public space and the extent to which this is incorporated into public housing revitalization. The study findings show that the contemporary principles guiding public housing revitalization do not match how young people define and value public space. Findings reveal that young people have a broad definition of public space which encompasses public, quasi-public and private spaces. They also demonstrate that understanding public space involves both physical and social elements. This is incorporated into their ideas regarding revitalization. Young people placed more of an emphasis on social than physical solutions. Key to the findings are young people’s preferences for a neighbourhood network of walkways over through streets, maintaining community insularity, local landmarks and culture and their fears over losing these due to change brought about by new residents. Many public space elements were regarded as simultaneously positive and negative. They regard the revitalization process of their neighbourhood public spaces with mixed emotions, including trepidation, scepticism and hope. In this way, study findings add to the existing literature on young people and urban planning. Young people have a distinctive way of experiencing the urban environment and when asked in an appropriate manner, will share revealing insights that would not necessarily have been thought of by adults (Hart, 1997). The study recommendations build upon the existing literature on the participation of young people in urban planning. This study shows that there is a need for planners to work alongside local community agencies and organizations already involved with young people. There is also a need to reconsider how planners address the issues of equity and public engagement. Young people do not have a political voice. For this reason, it is important for planners to consider the principles of equity and advocacy in a manner that embraces strategies for planning with multiple publics. Planners need to be educated and made aware of the different methods to appropriately engage young people. This includes adapting participatory techniques, determining agents of community access and self-reflexivity.