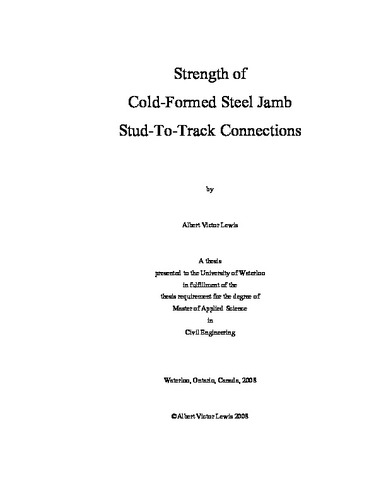 Cold-formed steel structural members are used extensively in building construction, with a common application being wind load bearing steel studs. The studs frame into horizontal steel track members at the top and bottom of the wall assembly, with the stud-to-track connection typically being made with self-drilling screws or welds. The wall studs are designed to carry lateral loads only and must be checked for web crippling at the end reactions. While a design expression currently exists for the single stud-to-track connection, there is no similar design expression for multiple jamb stud members. An experimental investigation was carried out, consisting of 94 jamb stud assembly tests subjected to end-one-flange loading. The stud-to-track connections consisted of single C-section studs located at the end of a track simulating a door opening, and a built-up jamb made up of two studs simulating framing at either a window or door opening. The members were attached to the track with self-drilling screws. The research objective was to determine the failure modes and develop a design expression for these structural assemblies. The scope of the experimental investigation covered the following range of parameters: i) Stud and track depths of 92 mm and 152 mm; ii) Stud and track thickness (0.84 mm, 1.12 mm, 1.52 mm and 1.91 mm); iii) Configuration of jamb studs (back-to-back, toe-to-toe and single); iv) Location of jamb studs in the track (interior and end); v) Screw size (#8, #10 and #12); vi) Screw location (both flanges and single flange). Based on the findings of this investigation, design expressions are proposed to predict the capacity of this connection for two limit states: web crippling of the jamb stud; and, punch-through of the track. The web crippling design expression was taken from the North American Specification for the Design of Cold-Formed Steel Structural Members [AISI 2007a; CSA 2007] with new coefficients developed from the test data of the jamb stud-to-track assemblies. A new design expression is also proposed for the track punch-through failure mode, which differs from the approach currently used in the North American Standard for Cold-Formed Steel Framing – Wall Stud Design [AISI 2007b]. A proposal is also recommended to revise the wording in the North American Standard for Cold-Formed Steel Framing – Wall Stud Design [AISI 2007b] to include provisions for the design of jamb studs based on the results of this research.