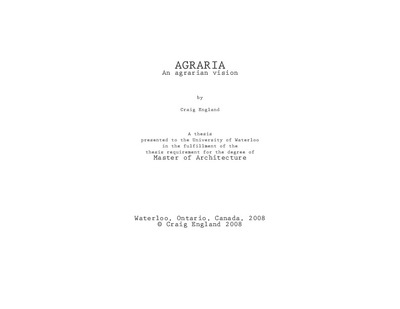 This thesis is concerned with reconnecting people to the land. It has been developed as a reaction to the current environmental crises concerning peak oil, urban sprawl, and the ongoing opposition between humans and the natural world. This thesis posits that the most direct way to reconnect people to the land is through the practice of agriculture. The thesis is written as a manifesto. The intent is to clearly declare the role that an agrarian development can play in our society. As a manifesto, it is written with the understanding that current political and economical considerations be suspended from the context of the thesis. It is a suggestion for the re-evaluation of contemporary agriculture, a new approach to development, and a new style for living. The thesis is broken into three sections. The first is an empirical introduction to the issues surrounding the thesis. Following this, a synopsis of readings concerning the work of a number of agricultural innovators is discussed. Large scale, rural based utopian precedents were studied more for their theory than for their architectural implications. The second section is the written Manifesto. The third is the design proposition of the thesis that follows the precepts outlined in the Manifesto. This design, which is a proposition for a new large-scale, hybrid urban/rural form of settlement, is named AGRARIA. This thesis is not meant to be a ‘back-to-the-land’ regressive social movement, but rather it suggests that current development of our arable land could be more in tune with its environment and still remain productive land after development. It is a proposition for the localization of production, and direct involvement in our food system. Following the precepts of the design proposal, a new alternative to urban sprawl can be discussed. This new typology will change the pattern of suburban development from consumptive elements into productive ones, and from isolationist environments into integrative ones. It is envisioned that this trend in development and lifestyle shall enable the spread of an agrarian ideology throughout rural areas and into urban centres.