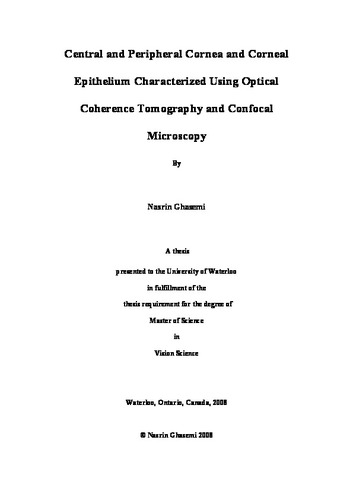 Abstract Both in the closed and open eye state the superior limbus is covered by the upper lid. This region is of physiological interest and clinical importance because in chronic hypoxia, neovascularization of the cornea commonly occurs here. The limbal region in general is additionally of importance as the stem cells which are the source of the new corneal cells are located in the epithelium of the limbus and these are vital for normal functioning and are affected under certain adverse conditions. Purpose: In this experiment I examined corneal morphology in the limbal area and in particular under the upper lid in order to primarily examine the variation in the corneal limbal epithelial and total thickness as well as epithelial and endothelial cell density. Methods: I measured 30 eyes OD/OS (chosen randomly) of thirty healthy subjects aged from 18 to 55 years in the first study and twelve participants in the second study, with refractive error ≤ ±4 D and astigmatism ≤ 2 D. The thickness and cell density of five positions: superior, inferior, temporal, nasal limbal and central cornea was determined with optical coherence tomography (OCT) and confocal microscopy. At least three scans of each position were taken in both studies with OCT. At least 40 of 100 adjacent sagittal scans of each image were measured using OCT software program. In the confocal study, image J software was used to determine cell densities. Results: The epithelial and corneal limbal thickness were significantly thicker than the epithelial and central corneal thickness (p<0.05). The limbal, inferior cornea is thinner than the three other positions and the temporal region of the cornea is the thickest both in epithelial and total cornea. Epithelial cell density was significantly lower in the superior cornea than the four other positions. There was no significant difference in the endothelial cell density. Conclusions: Using OCT with high resolution and cross-sectional imaging capability and confocal microscope with high magnification, I found that the limbal cornea is significantly thicker than the central cornea both in total and in epithelial thickness. In the limbus, one might expect the superior cornea (under the lid) to be thickest (because of the expected hypoxia) whereas I found the temporal cornea was thickest. The epithelial cell density was lower in the superior cornea but there was no significant difference in cell densities in the endothelium. Further morphological investigation is of interest.