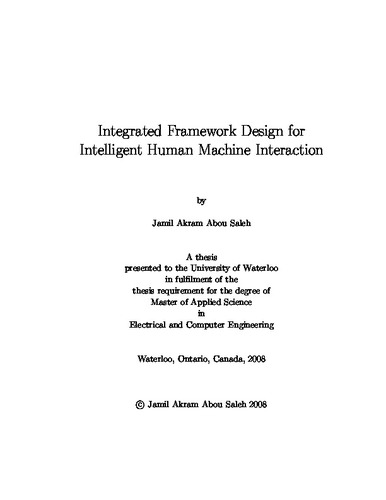 Human-computer interaction, sometimes referred to as Man-Machine Interaction, is a concept that emerged simultaneously with computers, or more generally machines. The methods by which humans have been interacting with computers have traveled a long way. New designs and technologies appear every day. However, computer systems and complex machines are often only technically successful, and most of the time users may find them confusing to use; thus, such systems are never used efficiently. Therefore, building sophisticated machines and robots is not the only thing someone has to address; in fact, more effort should be put to make these machines simpler for all kind of users, and generic enough to accommodate different types of environments. Thus, designing intelligent human computer interaction modules come to emerge. In this work, we aim to implement a generic framework (referred to as CIMF framework) that allows the user to control the synchronized and coordinated cooperative type of work that a set of robots can perform. Three robots are involved so far: Two manipulators and one mobile robot. The framework should be generic enough to be hardware independent and to allow the easy integration of new entities and modules. We also aim to implement the different building blocks for the intelligent manufacturing cell that communicates with the framework via the most intelligent and advanced human computer interaction techniques. Three techniques shall be addressed: Interface-, audio-, and visual-based type of interaction.