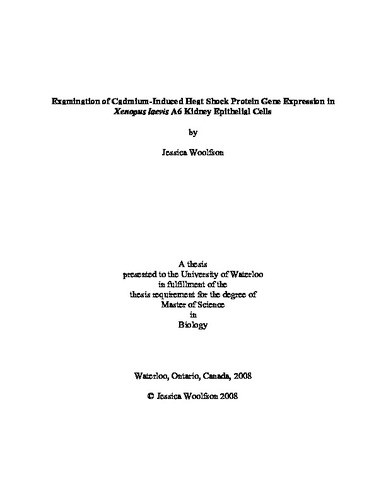 Cadmium is a highly toxic chemical and has been classified by the International Agency for Research on Cancer as a human carcinogen. Cadmium is abundant in the environment, at specific work places, and in food and water. Toxicological responses to cadmium exposure include respiratory diseases, neurological disorders and kidney damage. The present study examined the effects of cadmium on heat shock protein (HSP) accumulation in Xenopus laevis A6 kidney epithelial cells. HSPs are molecular chaperones involved in protein folding and translocation. In response to environmental stress these proteins bind to unfolded protein and inhibit their aggregation. Stress-inducible hsp gene transcription is mediated by the heat shock promoter element (HSE), which interacts with heat shock transcription factor (HSF). In the present study, hsp30 and hsp70 mRNA and protein were induced by heat shock, as determined by northern and western blot analysis. Exposure of A6 cells to cadmium chloride also induced the expression of hsp genes. For example, northern and western blot analysis revealed that exposure of A6 cells to cadmium chloride induced the accumulation of hsp30 and hsp70 mRNA and their respective proteins. Western blot analysis also revealed that A6 cells recovering from a cadmium chloride treatment retained relatively high levels of HSP30 and HSP70 protein accumulation over 24 h after the removal of the stress. Treatments combining a mild heat shock and cadmium chloride resulted in a synergistic increase in hsp30 and hsp70 gene expression at mRNA and protein levels. Further experiments in which two stressors were combined revealed that synergistic effects occurred with varying cadmium concentrations and different temperatures. Immunocytochemistry and confocal microscopy were used to confirm the results attained from western blot analysis. Further, this technique allowed the determination of intracellular localization of HSP30 in A6 cells and the examination of cellular morphology and cytoskeletal structure during cadmium chloride treatments. A 2 h heat shock at 33°C resulted in the accumulation of HSP30 in the cytoplasm, whereas a 2 h heat shock at 35°C resulted in some HSP30 accumulation in the peripheral region of the nucleus. This is in contrast to cells treated with cadmium chloride, where HSP30 accumulation was restricted to the cytoplasm. A 14 h 50 μM cadmium chloride treatment resulted in the accumulation of HSP30 in approximately 10% of cells. The proportion of cells displaying HSP30 accumulation increased to 80% and 95% in cells treated with 100 μM and 200 μM, respectively. HSP30 accumulation frequently occurred in large granular structures. High concentrations of cadmium chloride resulted in cell membrane ruffling at areas of cell-cell contact, as well as actin disorganization. This study characterized the pattern of hsp gene expression, accumulation and localization under various cadmium chloride conditions. These results suggest that hsp30 and hsp70 gene expression can be used as potential biomolecular markers for cadmium exposure.