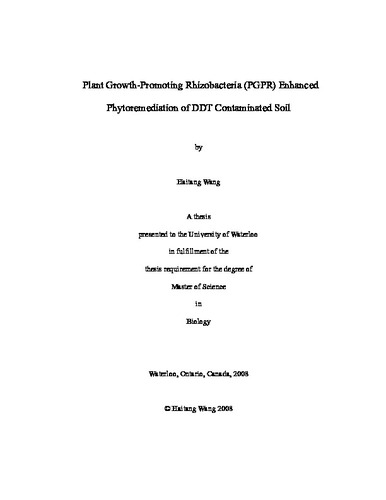 Although the pesticide DDT has been banned from use in Canada for more than three decades, DDT still persists in Canadian farmlands at detectable levels. Much effort, such as incineration, thermal desorption, and bioremediation, has been used to remediate DDT contaminated soils, but so far it is either too expensive or impractically slow. In this study, a three-year period of field trials was performed to investigate phytoremediation of DDT contaminated soil. In the field trials, millet, fall rye, sugar beet, potato, and pumpkin, treated with plant growth-promoting rhizobacteria (PGPR) were planted on two sites. As well, untreated plants were planted as a control. Plant growth, and 4,4’-DDT plus 4,4’-DDE concentrations in plant tissues and soil were monitored regularly. Comparing the plant growth between PGPR treated and untreated, PGPR significantly promoted the plant growth. On site 1, the root length and root weight of fall rye treated with PGPR were 16% and 44% greater, respectively, compared to the untreated plants. The root and shoot dry weights of millet treated with PGPR were 38% and 47% greater than those untreated plants. Root dry weight of sugar beet treated with PGPR was increased by 74% compared to untreated sugar beet. A significant effect of growth promotion was also observed in pumpkin and potato treated with PGPR. Following plant growth, DDT detection in plants was performed. 4,4’-DDT and 4,4’-DDE were found in plant tissues of fall rye, millet, sugar beet, and pumpkin. The concentrations of 4,4’-DDT and 4,4’-DDE in fall rye roots were 0.61 and 0.59 μg/g, respectively. In pumpkin tissues at harvest, 4,4’-DDT and 4,4’-DDE concentrations were 0.67 and 1.64 μg/g in roots, 1.06 and 2.05 μg/g in the lower stems, and 0.2 and 0.32 μg/g in the upper stems. The data indicated that it is feasible to phytoremediate DDT from contaminated soil. In addition, 4,4’-DDT concentrations in soils with different plant species were determined. In millet plot on site 1, 4,4’-DDT concentration in rhizosphere soil dropped by 41% in 2006 compared to 4,4’-DDT concentration at t0. In sugar beet plot on site 1, 28% of 4,4’-DDT dropped in rhizosphere soil in 2007. In pumpkin plot on site 1, 4,4’-DDT in rhizosphere soil was decreased by 22% in 2007. The results show that 4,4’-DDT concentration in rhizosphere soil was significantly lower than the initial level of DDT. Based on the data of 4,4’-DDT in soils and plant tissues, a mass balance was constructed and calculated. The preliminary mass balance shows that the total amount that DDT decreased in rhizopshere soil approximately equals to the total amount of DDT accumulated in plant tissues. This indicates that phytoextraction is the mechanism of DDT phytoremediation. In addition, PGPR promoted plant growth and then enhanced the phytoremediation efficiency of DDT. Therefore, the research indicates that PGPR assisted phytoremediation has a great potential for remediation of DDT and other chlorinated aromatics from impacted soil.