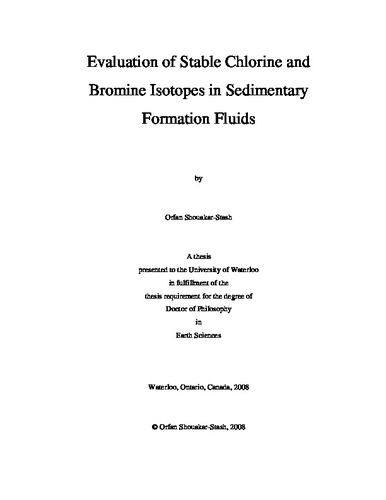 Two new analytical methodologies were developed for chlorine and bromine stable isotope analyses of inorganic samples by Continuous-Flow Isotope Ratio Mass Spectrometry (CF-IRMS) coupled with gas chromatography (GC). Inorganic chloride and bromide were precipitated as silver halides (AgCl and AgBr) and then converted to methyl halide (CH3Cl and CH3Br) gases and analyzed. These new techniques require small samples sizes (1.4 µmol of Cl- and 1 µmol of Br-). The internal precision using pure CH3Cl gas is better than ∓0.04 ‰ (∓STDV) while the external precision using seawater standard is better than ∓0.07 ‰ (∓STDV). The internal precision using pure CH3Br gas is better than ∓0.03 ‰ (∓STDV) and the external precision using seawater standard is better than ∓0.06 ‰ (∓STDV). Moreover, the sample analysis time is much shorter than previous techniques. The analyses times for chlorine and bromine stable isotopes are 16 minutes which are 3-5 times shorter than all previous techniques. Formation waters from three sedimentary settings (the Paleozoic sequences in southern Ontario and Michigan, the Williston Basin and the Siberian Platform) were analyzed for 37Cl and 81Br isotopes. The δ37Cl and δ81Br values of the formation waters from these basins are characterized by large variations (between -1.31 ‰ and +1.82 ‰ relative to SMOC and between -1.50 ‰ and +3.35 ‰ relative to SMOB, respectively). A positive trend between δ81Br and δ37Cl values was found in all basins, where an enrichment of δ81Br is coupled by an enrichment of δ37Cl. In the Paleozoic sequences in southern Ontario and Michigan, the δ37Cl and δ81Br signatures of formation water collected from northwest of the Algonquin Arch are distinct from those collected from southeast of the Arch. All of the brines from the northwest of the Algonquin Arch are characterized by depleted isotopic values in comparison with the isotopic values from the brines from southeast of the Arch. The δ81Br signatures of the two brines show total separation with no overlaps. The δ37Cl values show some overlap between the two groups. One of the scenarios that can be put forward is that the Arch forms a water divide, where sediments southeast of the Arch are dominated by Appalachian Basin formation waters, and the sediments located northwest of the Arch are dominated by the Michigan Basin formation waters. The δ81Br and δ37Cl signatures of the Williston Basin brines suggest the existence of several different brines that are isotopically distinct and located in different stratigraphic units, even though they are chemically similar. The relatively wide range of δ37Cl and δ81Br of the formation waters suggests that the ocean isotopic signatures were variable over geologic time. A seawater temporal curve for δ81Br and δ37Cl was proposed with a larger variation of δ81Br in comparison with δ37Cl. The isotopic variations of these two elements agree very well with 87Sr/86Sr seawater variation during the same period. In general, the use of chlorine and bromine stable isotopes can be very useful in assessing the origin and the evolutionary processes involved in evolving formation waters and also in distinguishing different brines (end members). Furthermore, they can be employed to investigate the hydrogeological dynamics of sedimentary basins.