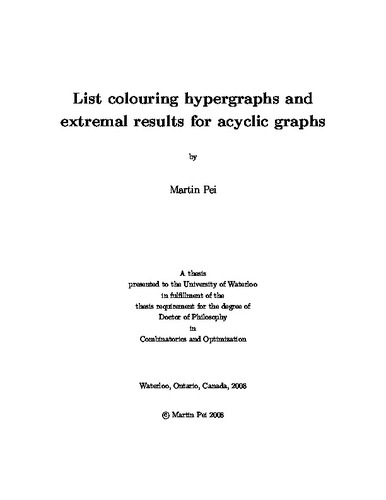 We study several extremal problems in graphs and hypergraphs. The first one is on list-colouring hypergraphs, which is a generalization of the ordinary colouring of hypergraphs. We discuss two methods for determining the list-chromatic number of hypergraphs. One method uses hypergraph polynomials, which invokes Alon's combinatorial nullstellensatz. This method usually requires computer power to complete the calculations needed for even a modest-sized hypergraph. The other method is elementary, and uses the idea of minimum improper colourings. We apply these methods to various classes of hypergraphs, including the projective planes. We focus on solving the list-colouring problem for Steiner triple systems (STS). It is not hard using either method to determine that Steiner triple systems of orders 7, 9 and 13 are 3-list-chromatic. For systems of order 15, we show that they are 4-list-colourable, but they are also ``almost'' 3-list-colourable. For all Steiner triple systems, we prove a couple of simple upper bounds on their list-chromatic numbers. Also, unlike ordinary colouring where a 3-chromatic STS exists for each admissible order, we prove using probabilistic methods that for every $s$, every STS of high enough order is not $s$-list-colourable. The second problem is on embedding nearly-spanning bounded-degree trees in sparse graphs. We determine sufficient conditions based on expansion properties for a sparse graph to embed every nearly-spanning tree of bounded degree. We then apply this to random graphs, addressing a question of Alon, Krivelevich and Sudakov, and determine a probability $p$ where the random graph $G_{n,p}$ asymptotically almost surely contains every tree of bounded degree. This $p$ is nearly optimal in terms of the maximum degree of the trees that we embed. Finally, we solve a problem that arises from quantum computing, which can be formulated as an extremal question about maximizing the size of a type of acyclic directed graph.