Detecting pathogenic Yersinia enterocolitica in surface water from the Grand River watershed: An evaluation and comparison of methods 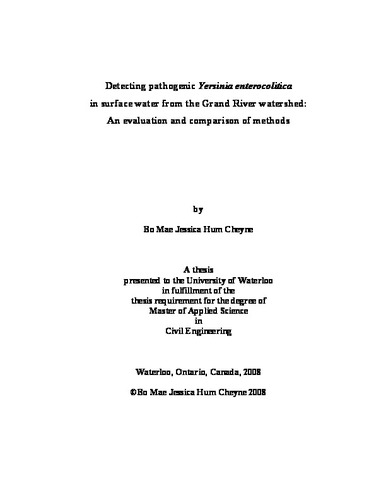 Yersinia enterocolitica are potentially pathogenic bacteria transmitted through the fecal oral route. Typical disease symptoms include those associated with gastrointestinal disease, although infection can also lead to more serious and invasive illnesses, particularly in sensitive populations. Previous surveys have detected Y. enterocolitica in surface water in various parts of the world, and studies have found drinking untreated water to be a possible risk factor for Y. enterocolitica infection. Methods available for the detection of Y. enterocolitica have been developed primarily for food and clinical samples and have not been tested extensively with water. More commonly used methods include culture based isolation of Yersinia spp. and polymerase chain reaction (PCR) based detection of Y. enterocolitica. Reports suggest that culture based methods available for the isolation of Y. enterocolitica may not be effective for environmental samples. Strain isolation using culture based methods is important, so that further subtyping information can be obtained for epidemiological investigations. In contrast, PCR based detection is more rapid, of higher throughput, can be highly specific and can target pathogenic strains within a species. The overall objective of this work was to evaluate culture based and PCR based methods for the detection of Y. enterocolitica in water, and to examine its prevalence in the Grand River watershed in Southwestern Ontario, Canada. Surface water in this watershed is used to provide all or part of the drinking water for approximately 500,000 people, as well as for recreational purposes. It is also one of the most heavily impacted watersheds in Canada by both agricultural and urban activities. Culture based studies compared two selective agars and four enrichment broths. Results showed that Cefsulodin Irgasan Novobiocin (CIN) agar and modified tryptic soy broth (mTSB) had greater potential for recovering Y. enterocolitica from surface water. Consequently, enrichment in mTSB followed by growth on CIN agar was used to isolate Yersinia from the Grand River. Yersinia strains were isolated from 52 out of 200 (26 %) surface water samples collected over a 17 month period. No seasonal trends were observed in isolation rates. Species isolated were typically considered to be non pathogenic species, although recent evidence suggests they may have potential virulence to humans. The majority of these strains have been found by other groups in surveys of aquatic environments. PCR methods developed targeted two Y. enterocolitica virulence genes: the ail gene, located in chromosomal DNA; and the yad A gene, located on a virulence plasmid. In surface water collected from the Grand River, the ail gene target was detected in 121 samples out of 319 (38 %) over a 29 month period and the yadA gene target was detected in 44 samples out of 206 (21 %) over a 20 month period. Both genes were detected more frequently when the water temperatures were colder. PCR-based studies conducted were quantitative, which has not previously been done with water samples. The median and maximum concentrations in samples positive for the ail gene were 40 and 2,000 cells/100 mL, and in samples positive for the yadA gene were 32 and 3,276 gene copies/100 mL, respectively. Overall results demonstrated that culture based methods are less sensitive than PCR based detection methods for specific detection of pathogenic Y. enterocolitica, suggesting that previous culture based surveys may have underestimated their potential prevalence. Furthermore, potentially pathogenic Y. enterocolitica may be present in the Grand River watershed. While Y. enterocolitica is relatively easily inactivated by traditional disinfection methods used in drinking water treatment processes, it is possible their presence poses a concern for recreational users and individuals drinking untreated water. This study suggests that further investigation is necessary to evaluate possible health risks associated with the occurrence of potentially pathogenic Y. enterocolitica in the Grand River. This work assists with the development of methods and information gathering for an emerging waterborne pathogen that has not been surveyed in the Grand River watershed, nor quantitatively surveyed in any water previously. Findings provide important information for drinking water providers and public health investigations.