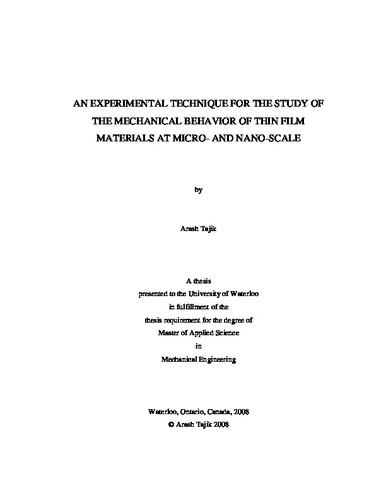 An experimental technique has been presented to probe the mechanical behavior of thin film materials. The method is capable of tensile testing thin films on substrate and free-standing thin film specimens. A mechanical gripper was designed to address the current challenges in gripping thin film specimens. In order to measure the strain field across the gage section, the moire interferometry technique was used and the respective optical setup was designed. A versatile microfabrication process has been developed to fabricate free-standing dog-bone specimens. Aluminum was used as the model material; however, any other metallization material can be integrated in the process. Thin film specimens have been characterized using SEM, AFM, and TEM. A process has been developed to fabrication diffraction gratings on the specimen by FIB milling. Different grating geometries were fabricated and the diffraction efficiency of the gratings was characterized. The structural damage induced by the Ga+ ions during the FIB milling of the specimens was partially characterized using STEM and EDS. In order to extract the strain field information from the moire interferogram data, a numerical postprocessing technique was developed based on continuous wavelet transforms (CWT). The method was applied on simulated uniform and nonuniform strain fields and the wavelet parameters were tuned to achieve the best spatial localization and strain accuracy.

Arash Tajik (2008). An Experimental Technique for the Study of the Mechanical Behavior of Thin Film Materials at Micro- and Nano-Scale. UWSpace. http://hdl.handle.net/10012/3709