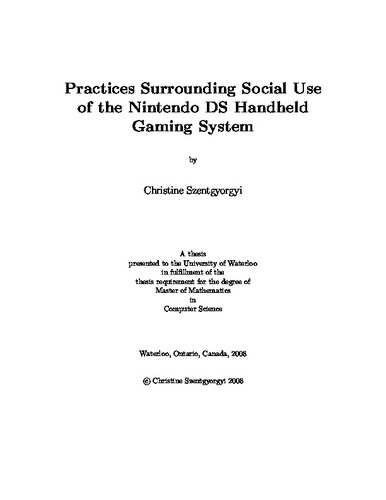 Ad-hoc wireless networking has recently become a standard feature of handheld video gaming systems. This capability, along with the portability of the devices, increases the number of places where people can easily engage in multiplayer games. The Nintendo DS, a handheld gaming system with ad-hoc wireless networking, has sold 64 million units worldwide. Its feature set, combined with its ubiquity, enable new forms of multiplayer gaming to emerge. Understanding how people adopt this technology is important for proposing how future handheld gaming systems could be better designed. This thesis reports findings from a qualitative study investigating the collocated multiplayer gaming practices of Nintendo DS users. Through interviews with fifteen DS owners and observations of seven organized public gaming events we examined why, where, and who participants played with, as well as the details of how games were formed, carried out, and experienced as social activities. With this data it is possible to describe how the DS's unique characteristics impact multiplayer gaming practices and the social gaming experience. From our data, we identified three major themes surrounding the social, multiplayer gaming practices of DS users: renegade gaming, or the notion that users reappropriate locations and contexts for multiplayer gaming, and social boundaries on multiplayer gaming contexts; practical and social barriers to the formation of pick-up games; and private gaming spheres, or the individualized gaming contexts that the handheld device's form factor creates within larger social contexts. These findings lead us to propose a set of design implications for future handheld gaming systems in order to better support pick-up gaming and sharing experiences with groups and crowds.