Evolving Priorities: Canadian Oil Policy and the United States in the years leading up to the Oil Crisis of 1973 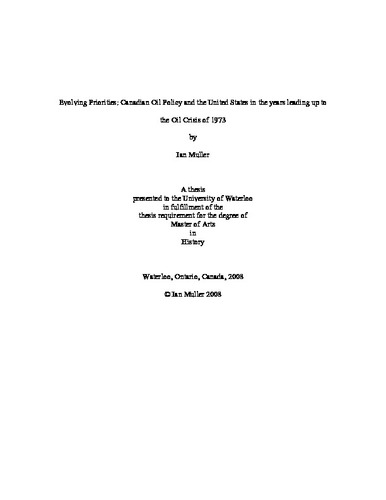 This study investigates the relationship between the oil industries of Canada and the United States in the years leading up to the 1973 oil crisis. Shortly after the Second World War it became apparent that American domestic production would not sustain that nation’s energy demands. As a result, an important energy relationship developed between Canada and the United States in the 1960s and early 1970s. The 1973 oil crisis represented a turning point in energy relations between Canada and the United States. Historically, through multinational oil company influence and the general reality of petroleum surpluses, Canadian oil policy was defined by its reliance on exporting oil to the United States. Exemptions to the American mandatory oil import quota system led to the excessive output of Canadian petroleum resources, which in conjunction with a legacy of overstated reserve estimates created Canadian energy shortages by 1973. In an effort to prevent the 1973 oil crisis from further hindering the Canadian petroleum industry, Canadian officials transitioned Canada’s oil policy towards the nationalistic strategy of self-sufficiency. The harsh reality of the oil embargo, elevated prices, and supply shortages that occurred as a result of the oil crisis placed an emphasis on the necessity of nations providing for their own energy needs. Canada’s embrace of the goal of self-sufficiency was thus viewed with a sense of legitimacy. The similar self-sufficiency goals of American policy limited the degree to which they could protest a policy that placed the United States in a disadvantaged position. Canada’s move towards a more self-sufficient oil policy represented the desire of the Canadian government and people to take greater control of their oil industry.