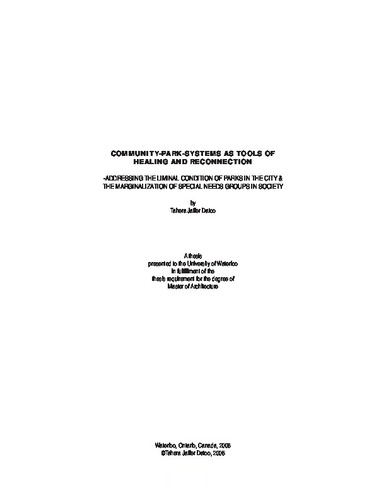 This thesis looks at re-investing the landscape with community and environmental purpose, by bringing ‘infrastructure’ into the realm of ‘public works’, focusing on two community issues, that are demonstrative of a general condition that can be transferred to other sites within Toronto or other cities. The first issue discussed is the liminal condition of urban parks in the city. Since Euro-American settlement, there has been a historical devaluation of nature within the city of Toronto. This can be seen through a physical suppression of natural systems and through a psychological separation of nature from the city. The Garrison Creek, a defining element to the landscape of early Toronto, now buried underground, is one example demonstrative of this liminal condition. Proposals, by Brown+Storey Architects, in the 1990s, discussed the re-linkage of remnants of the ravine system, empty lots and urban park spaces, into a cohesive community-park-network and a watershed-system. The design aspect of this thesis builds on Brown+Storey’s neighbourhood park proposals by adding another layer - a supportive housing network. The second community issue discussed is the marginalization of special needs groups within society. The background given is a detailed history of their residential situations, from pre-institutional to Community Living trends, for various marginalized groups; with specific focus on persons with developmental disabilities. The final design proposal links the two community concerns and involves the re-linkage of disconnected neighbourhood parks in the city that would eventually become: a community park system (complete with a storm water management system), and part of a supportive housing network with neighbourhood allotment gardens. Thematically the two issues are linked, with the park as a tool for healing and reconnection of the city and nature relationship, as well as the marginalized group and community relationship. The approach taken is to look specifically at one community park (Trinity-Bellwoods, within the Garrison Creek Ravine system in Toronto), and one disadvantaged group (persons with developmental disabilities). The result is the design of a group-home complex, with varying degrees of support, for persons with developmental disabilities, sited within Trinity-Bellwoods Park. A central issue to this thesis is the use of public park space for supportive housing. Although Toronto’s Official Plan is generally prohibitive of such construction (Section 2.3.2 Policy 4 and 5, Section 4.3 Policy 2), it is the contention of this thesis that including supportive housing and gardens within parks would be highly beneficial for both the marginalized group that would be housed there and the community that it is part of. As such, it is argued that sensitive development of public park space for such a use can have positive results and should be allowed. Parks are intended to be centers for community life. Because of their central location and highly public nature, they lend themselves as venues for interaction –they are an environment where through visibility and awareness, there is encouragement towards openness, compassion, and acceptance. The final design uses gardening, as a tool for personal healing, and as a method for interaction in the form of neighbourhood allotment gardens. The hope is that such an environment would encourage engagement between the disadvantaged group and the community. This increased communication could then lead to personal identification; reducing fear, and ultimately the lessening of isolation or marginalization. Thus the final design proposal is understood as a possible prototype for the urban park, which is augmented as a place truly reflective of a “community” park, alluding to a higher purpose in the city that promotes the common good.

Tahera Jaffer Datoo (2008). Community-Park-Systems as Tools of Healing and Reconnection -Addressing the Liminal Condition of Parks in the City & The Marginalization of Special Needs Groups in Society. UWSpace. http://hdl.handle.net/10012/3704