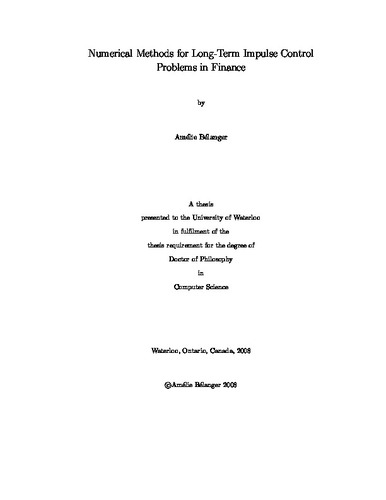 Several of the more complex optimization problems in finance can be characterized as impulse control problems. Impulse control problems can be written as quasi-variational inequalities, which are then solved to determine the optimal control strategy. Since most quasi-variational inequalities do not have analytical solutions, numerical methods are generally used in the solution process. In this thesis, the impulse control problem framework is applied to value two complex long-term option-type contracts. Both pricing problems considered are cast as impulse control problems and solved using an implicit approach based on either the penalty method or the operator splitting scheme. The first contract chosen is an exotic employee stock option referred to as an infinite reload option. This contract provides the owner with an infinite number of reload opportunities. Each time a reload occurs, the owner pays the strike price using pre-owned company shares and, in return, receives one share for each option exercised and a portion of a new reload option. Numerical methods based on the classic Black-Scholes equation are developed while taking into account contract features such as vesting periods. In addition, the value of an infinite reload option to it's owner is obtained by using a utility maximization approach. The second long-term contract considered is a variable annuity with a guaranteed minimum death benefit (GMDB) clause. Numerical methods are developed to determine the cost of the GMDB clause while including features such as partial withdrawals. The pricing model is then used to determine the fair insurance charge which minimizes the cost of the contract to the issuer. Due to the long maturity of variable annuities, non-constant market parameters expressed through the use of regime-switching are included in the GMDB pricing model.