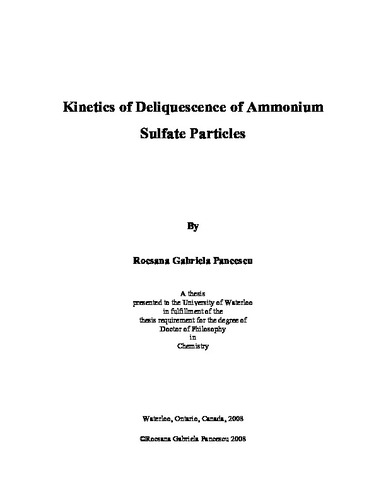 The goal of this project was to study the deliquescence kinetics of aerosol particles of atmospheric significance. In the course of this work a novel experimental method was developed, which utilizes the measurement of the water vapor loss in laminar aerosol flow to determine vapor uptake on the aerosol surface. The newly designed flow tube apparatus uses a system of Nafion based dryers and humidifiers, which greatly simplifies the optimization and control of the relative humidity in the aerosol flow. The design, which also utilizes a movable inlet, enables easy variation of the aerosol residence time in the deliquescence reactor, while keeping other experimental conditions constant. In this study, a numerical retrieval procedure was used to characterize aerosols in situ from their IR extinction spectra. The procedure allows that the aerosol size, number distribution, phase and composition be determined, provided the optical constants of all the components (materials) comprising the aerosol are known. For the purpose of studying the deliquescence kinetics of ammonium sulfate aerosol and monitoring their evolution from solid to liquid (state), we have acquired a set of optical constants for a range of (NH4)2SO4 compositions. A set of experiments in a somewhat modified flow tube set up was performed to produce AMS aerosols of known composition, including solid, saturated (water) solution (40 % wt.) and a series of diluted solutions with composition ranging between 40 and 10 % wt. in 5 % increments. The IR spectra of these model aerosols were used to derive the optical constants, using an inversion method proposed by Clapp. The derived refractive indices, which cover the spectral range from 590 to 5990 cm-1 with 2 cm-1 resolution, were compared with those already available in the literature. Using various examples to compare the quality of fittings to experimental spectra, we demonstrated that our optical constants present an improvement relative to those previously reported by B. Toon’s (for crystalline AMS) and S. Martin’s (for AMS solution). The suitability of applying this procedure to ammonium sulfate aerosols and its sensitivity to spectral range was also investigated and discussed. As a preparatory step for the deliquescence kinetics study, our new flow tube apparatus and the tools for the characterization of aerosol were verified in a standard deliquescence experiment performed on (NH4)2SO4 aerosols. The deliquescence process of an equilibrated aerosol flow was monitored as a function of increasing humidity and the deliquescence relative humidity (DRH) determined to be 79.6 ± 0.85 % which is, within experimental uncertainty, in an excellent agreement with the results reported by other research groups. In the kinetic experiment, a flow of solid (NH4)2SO4 aerosols is pre-humidified to a humidity close to, but enough below DRH that there is no detectable amount of liquid aerosols in the system. Such an equilibrated aerosol flow was introduced to the deliquescence reactor where it is further humidified in a controllable manner, by varying the position of the movable inlet. The amount of water transferred to the aerosol through the Nafion membrane was closely monitored, as well as the resulting increase in the water content in the aerosol flow (both gaseous and liquid). This was achieved by measuring the RHs and flow rates of the aerosol and humidification flow, and the characterization of aerosol composition and concentration using their IR spectra. The experimental conditions and aerosol residence times in the reactor where chosen such that no other diluted solution except for saturated (NH4)2SO4 droplets were produced in the process. The number distribution of deliquesced aerosols and the corresponding change in the water content in the aerosol flow were used by a newly developed kinetic model to determine the kinetics of the deliquescence process. Assuming fully developed laminar flow conditions, the water vapor concentration in the flow and its depletion in the presence of aerosol was modeled, to retrieve the value of the water vapor uptake. In the case of micron-sized ammonium sulfate aerosols, which were used in this study, the uptake coefficient,, was determined to be 0.0072 ± 6.54x10-3. The uncertainty associated with this value, as well as the suggested improvements to the experimental procedure and the kinetic model in order to reduce the uncertainty were discussed.