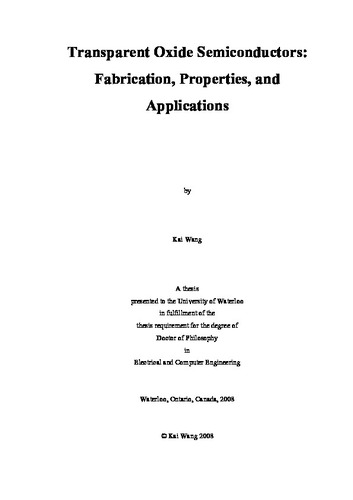 Transparent oxide semiconductors (TOSs) are materials that exhibit electrical conduction and optical transparency. The traditional applications of these materials are transparent conducting oxides in flat-panel displays, light-emitting diodes, solar cells, and imaging sensors. Recently, significant research has been driven to extend state-of-the-art applications such as thin-film transistors (TFTs). A new and rapidly developing field is emerging, called transparent electronics. This thesis advances transparent electronics through developing a new technique to fabricate TOSs and demonstrating their applications to active semiconductor devices such as diodes and TFTs. Ion beam assisted evaporation (IBAE) is used to deposit two common TOSs: zinc oxide (ZnO) and indium oxide (In2O3). The detailed material study is carried out through various characterization of their electrical properties, chemical composition, optical properties, crystal structure, intrinsic stress, topology, and morphology, as well as an investigation of thin-film property as a function of the deposition parameters: ion flux and energy, and deposition rate. The study proves that IBAE technique provides the capability for fabricating TOSs with controllable properties. By utilizing the newly developed semiconducting ZnO, p-NiO/i-ZnO/n-ITO and n-ITO/i-ZnO/p-NiO heterostructure photodiodes with a low leakage are proposed and assessed. Analysis of their current-voltage characteristics and current transient behaviour reveals that the dominant source of leakage current stems from the deep defect states in the intrinsic zinc oxide layer, where its dynamic response at low signal levels is limited by the charge trapping. The exploration of the photoconduction mechanism and spectral response confirms that such photodiodes are potentially applicable for ultraviolet (UV) sensors. The comparative study of both device structures provides further insights into the leakage current mechanisms, p-i interface properties, and quantum efficiency. Secondly, with the novel semiconducting In2O3, TFTs are fabricated and evaluated. The device performance is optimized by addressing the source/drain contact issue, lowering the intrinsic channel resistance, and improving the dielectric/channel interface. The best n-channel TFT has a high field-effect mobility of ~30 cm^2/Vs, a high current ON/OFF ratio of ~10^8, and a sub-threshold slope of 2.0 V/decade. More important, high-performance indium oxide TFTs here are integrated with the silicon dioxide and silicon nitride gate dielectrics by conventional plasma-enhanced chemical vapour deposition, which makes indium oxide TFT a competitive alternative for next generation TFTs to meet the technical requirements for flat-panel displays, large area imager arrays, and radio frequency identification tags. The stability study shows that indium oxide TFTs are highly stable with a very small threshold voltage shift under both a long-term constant voltage and long-term current stress. The dynamic behaviour indicates factors that affect the operation speed of such TFTs. A descriptive model is proposed to link the material properties and the processing issues with the device performance to facilitate further research and development of TOS TFTs. The research described in this thesis is one of the first investigations of the fabrication of TOSs by the IBAE and their applications to a variety of thin-film devices, particularly UV sensors and TFTs.