An Exploration of Korean Immigrant Women's Leisure in Spiritual Settings 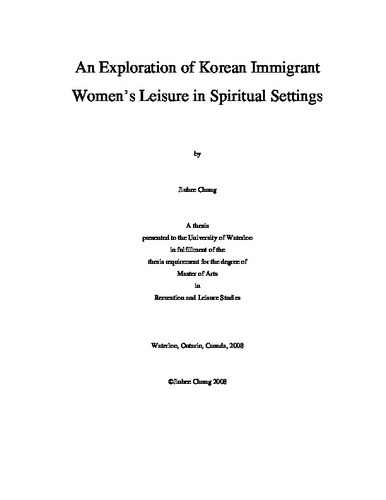 The purpose of this study was to explore the role and significance that ethnic churches have in the lives of Korean immigrant women in Canada. Particular attention was paid to the ethnic church as a potential leisure site, and the benefits associated with church participation, such as social interaction, social capital development, adaptation to living in Canada, and resistance to constraining ideologies. At the same time, possible negative outcomes of church association were also addressed, as appropriate, such as lack of integration into the broader Canadian society and reproduction of traditional gender ideologies. Purposeful intensity sampling method was used to find Korean immigrant women who could provide information-rich stories for this exploratory in-depth study. Data were collected through in-depth, semi-structured interviews conducted one-to-one with a semi-structured format. Seven women were interviewed. These women were all first-generation married Korean immigrants who had lived in Canada for over one year. Initially the first participants were recruited through advertisements handed out to various churches in an urban/suburban region of south-west Ontario. Snowball sampling also took place as an alternative method for finding more information-rich cases. The analysis of this study resulted in the following themes: The first theme was the benefits gained from ethnic church attendance. These included exchange of information, emotional support and reinforcement of ethnic identity. Second, conflicts, divisions and challenges deriving from church attendance were explored. Negative aspects such as challenges between traditional and new values, lack of interaction with mainstream Canadian society, and reinforcement of gender inequality were evident. Finally, despite the difficulties that derived from being a member of the Korean ethnic church, the community provided help in adjusting in the new life for the women. The Korean ethnic community acted as an extension of family while helping newcomers through a variety of services in adjusting to life in Canada. The findings of this study do show that the Korean ethnic church is an important site for leisure for women. Although church attendance does not seem to specifically facilitate integration or resistance to the Canadian society, it did help them to re-create a smaller community that helped the women deal with their daily lives. As a result they often felt no need to step out into the larger society: thus creating ‘little Koreas’ within Canada.