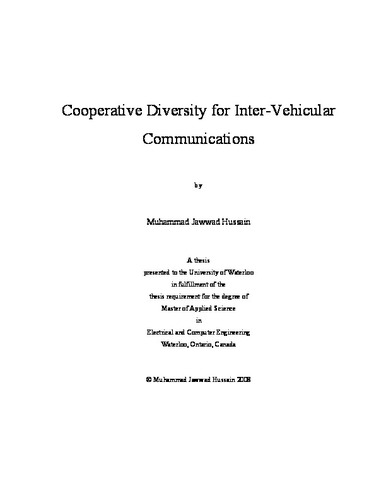 Recent technological advances and pervasiveness of wireless communication devices have offered novel and promising solutions to the road safety problem and on-the-go entertainment. One such solution is the Inter-Vehicular Communications (IVC) where vehicles cooperate in receiving and delivering the messages to each other, establishing a decentralized communication system. The communication between vehicles can be made more effective and reliable at the physical layer by using the concept of space-time coding (STC). STC demonstrated that the deployment of multiple antennas at the transmitter allows for simultaneous increase in throughput and reliability because of the additional degree of freedom offered by the spatial dimension of the wireless. However, the use of multiple antenna at the receiver is not feasible because of the size and power limitations. Cooperative diversity, which is also known as user cooperation is ideal to overcome these limitations by introducing a new concept of using the antenna of neighboring node. This technique exploits the broadcast nature of wireless transmissions and creates a virtual (distributed) antenna array through cooperating nodes to realize spatial diversity advantage. Although there has been a growing literature on cooperative diversity, the current literature is mainly limited to Rayleigh fading channel model which typically assumes a wireless communication scenario with a stationary base station antenna above roof-top level and a mobile station at street level. In this thesis, we investigate cooperative diversity for inter-vehicular communication based on cascaded Rayleigh fading. This channel model provides a realistic description of inter-vehicular channel where two or more independent Rayleigh fading processes are assumed to be generated by independent groups of scatters around the two mobile terminals. We investigate the performance of amplify-and-forward relaying for an inter-vehicular cooperative scheme assisted by either a road-side access point or another vehicle which acts as a relay. Our diversity analysis reveals that the cooperative scheme is able to extract the full distributed spatial diversity. We further formulate a power allocation problem for the considered scheme to optimize the power allocated to broadcasting and relaying phases. Performance gains up to 3 dB are obtained through optimum power allocation depending on the relay location.