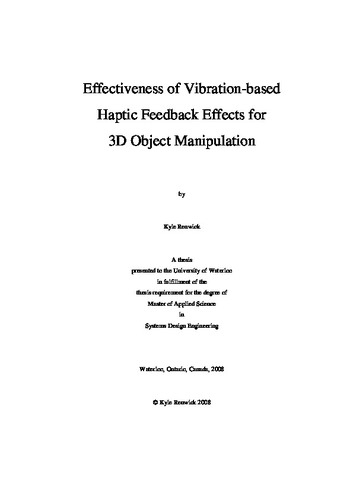 This research explores the development of vibration-based haptic feedback for a mouse-like computer input device. The haptic feedback is intended to be used in 3D virtual environments to provide users of the environment with information that is difficult to convey visually, such as collisions between objects. Previous research into vibrotactile haptic feedback can generally be split into two broad categories: single tactor handheld devices; and multiple tactor devices that are attached to the body. This research details the development of a vibrotactile feedback device that merges the two categories, creating a handheld device with multiple tactors. Building on previous research, a prototype device was developed. The device consisted of a semi-sphere with a radius of 34 mm, mounted on a PVC disk with a radius of 34 mm and a height of 18 mm. Four tactors were placed equidistantly about the equator of the PVC disk. Unfortunately, vibrations from a single tactor caused the entire device to shake due to the rigid plastic housing for the tactors. This made it difficult to accurately detect which tactor was vibrating. A second prototype was therefore developed with tactors attached to elastic bands. When a tactor vibrates, the elastic bands dampen the vibration, reducing the vibration in the rest of the device. The goal of the second prototype was to increase the accuracy in localizing the vibrating tactor. An experiment was performed to compare the two devices. The study participants grasped one of the device prototypes as they would hold a computer mouse. During each trial, a random tactor would vibrate. By pushing a key on the keyboard, the participants indicated when they detected vibration. They then pushed another key to indicate which tactor had been vibrating. The procedure was then repeated for the other device. Detection of the vibration was faster (p < 0.01) and more accurate (p < 0.001) with the soft shell design than with the hard shell design. In a post-experiment questionnaire, participants preferred the soft shell design to the hard shell design. Based on the results of the experiment, a mould was created for building future prototypes. The mould allows for the rapid creation of devices from silicone. Silicone was chosen as a material because it can easily be moulded and is available in different levels of hardness. The hardness of the silicone can be used to control the amount of damping of the vibrations. To increase the vibration damping, a softer silicone can be used. Several recommendations for future prototypes and experiments are made.