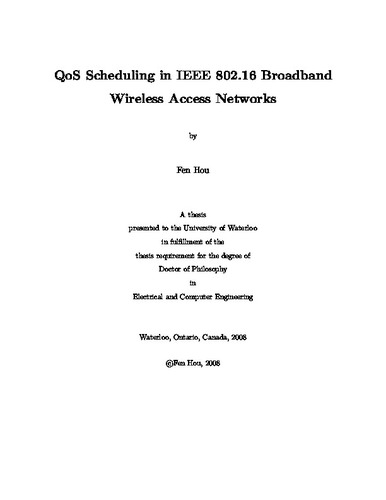 With the exploding increase of mobile users and the release of new wireless applications, the high bandwidth requirement has been taking as a main concern for the design and development of the wireless techniques. There is no doubt that broadband wireless access with the support of heterogeneous kinds of applications is the trend in the next generation wireless networks. As a promising broadband wireless access standard, IEEE 802.16 has attracted extensive attentions from both industry and academia due to its high data rate and the inherent media access control (MAC) mechanism, which takes the service differentiation and quality of service (QoS) provisioning into account. To achieve service differentiation and QoS satisfaction for heterogenous applications is a very complicated issue. It refers to many fields, such as connection admission control (CAC), congestion control, routing algorithm, MAC protocol, and scheduling scheme. Among these fields, packet scheduling plays one of the most important roles in fulfilling service differentiation and QoS provisioning. It decides the order of packet transmissions, and provides mechanisms for the resource allocation and multiplexing at the packet level to ensure that different types of applications meet their service requirements and the network maintains a high resource utilization. In this thesis, we focus on the packet scheduling for difficult types of services in IEEE 802.16 networks, where unicast and mulitcast scheduling are investigated. For unicast scheduling, two types of services are considered: non-real-time polling service (nrtPS) and best effort (BE) service. We propose a flexible and efficient resource allocation and scheduling framework for nrtPS applications to achieve a tradeoff between the delivery delay and resource utilization, where automatic repeat request (ARQ) mechanisms and the adaptive modulation and coding (AMC) technique are jointly considered. For BE service, considering the heterogeneity of subscriber stations (SSs) in IEEE 802.16 networks, we propose the weighted proportional fairness scheduling scheme to achieve the flexible scheduling and resource allocation among SSs based on their traffic demands/patterns. For multicast scheduling, a cooperative multicast scheduling is proposed to achieve high throughput and reliable transmission. By using the two-phase transmission model to exploit the spatial diversity gain in the multicast scenario, the proposed scheduling scheme can significantly improve the throughput not only for all multicast groups, but also for each group member. Analytical models are developed to investigate the performance of the proposed schemes in terms of some important performance measurements, such as throughput, resource utilization, and service probability. Extensive simulations are conducted to illustrate the efficient of the proposed schemes and the accuracy of the analytical models. The research work should provide meaningful guidelines for the system design and the selection of operational parameters, such as the number of TV channels supported by the network, the achieved video quality of each SS in the network, and the setting of weights for SSs under different BE traffic demands.