Economic Revitalization or the Creative Destruction of Heritage: A Case Study of Port Dalhousie at a Cusp 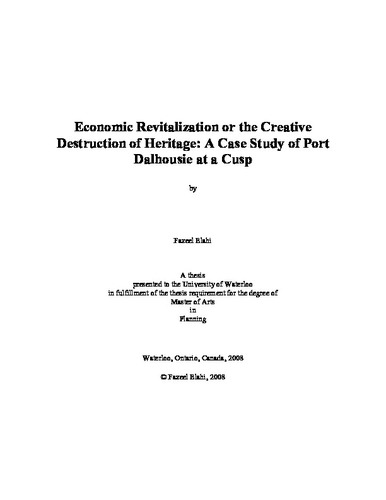 Ontario, Canada’s most populous province enacted its Heritage Act in 1975. The Ontario Heritage Act enables municipalities to conserve built heritage in a number of ways, including instituting heritage conservation districts. Heritage districts recognize and conserve built heritage that extend beyond the special architectural qualities of individual buildings. Port Dalhousie is a quaint community located on the south shore of Lake Ontario, and inextricably linked to the first three Welland Canals. Now a part of the City of St. Catharines, it was designated a heritage conservation district in 2003. However, after the designation an ambitious and controversial re-development plan was proposed for the community’s historic commercial core. The re-development aimed to revitalize the area, but in doing so also threatened to destroy the heritage. This case study used historical research, semi-structured interviews, and questionnaires to investigate the cycle of heritage commodification, the effectiveness of public participation and the exercise of power as the various stakeholders in the community of Port Dalhousie deliberated over the future of its built heritage. Findings from this study reveal that sound governance and effective planning policies promoted public participation. The results also confirm that active civic involvement from local residents plays an integral role in heritage conservation, and influences developments that threaten heritage. This study recommends that heritage planning should be more proactive in municipal land use planning, and heritage guidelines for conservation areas should be part of broader heritage management programs where power sharing, participation, and decision making reflect social equity. The findings and recommendations from this study are intended to assist communities, managers and planners in future efforts to conserve built heritage.

Fazeel Elahi (2008). Economic Revitalization or the Creative Destruction of Heritage: A Case Study of Port Dalhousie at a Cusp. UWSpace. http://hdl.handle.net/10012/3665