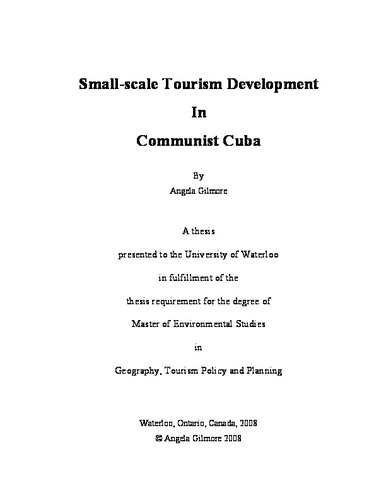 Tourism is arguably the world’s largest industry today, and has been adopted as an economic staple by countless low-income countries. However, while the tourism industry can bring much needed foreign capital into a country’s economy, it has also proven to have severe environmental, economic and social implications on host countries. With these implications come the drive for sustainable and ecotourism approaches, and more recently, pro-poor tourism, which is tourism that aims to generate net benefits specifically for the poor population of the tourism community or country. The purpose of this study is to explore the potential for pro-poor tourism strategies to be implemented in low-income countries, and evaluate the obstacles to implementing these strategies in small-scale tourism locations. The study site for this research is a small rural community in Communist Cuba, and the main objectives of the research are to evaluate the current economic linkages that exist within the study site; determine the thoughts and feelings of the local people with respect to their local tourism industry; evaluate the degree to which the study site is currently following pro-poor tourism principles and what possibilities exist for more to be done; and to offer recommendations for the case study location. In addition to a comprehensive literature review on the progression of Cuba’s tourism industry since the Revolution to present date, this research employs further methods to examine Cuba’s small-scale tourism industry including semi-structured and informal interviews with residents employed by the tourism industry, residents employed in sectors other than tourism, as well as local farmers. Further, participant observation is carried out over a three month period on the island, with one month spent specifically at the study site. The results of this study demonstrate that Cuba’s Communist political environment both fosters and hinders pro-poor tourism development. In terms of employment and agriculture, the State goes to great ends to utilize local resources to supply the local economy, however, with respect to entrepreneurship and the rigid regulations dictated by the State, pro-poor development is inhibited. Not surprisingly, Cubans generally have a positive opinion of the tourism industry, primarily because it has directly increased the standard of living of many, yet for those who do not work in tourism, State wages and monthly rations are inadequate, pushing many to find other means to make ends meet. These factors have swayed many people to dealings on the black market and to seek out legal and illegal employment within the tourism industry, both of which have serious implications on the country’s economy. The main conclusion drawn from this study is that Cuba’s small-scale tourism industry is in fact benefiting the country’s rural population, and generally, the residents’ standard of living within the study site has improved with its introduction. While the Cuban government has not purposefully adopted pro-poor tourism principles, some of the country’s Communist practices naturally lead to their adoption, i.e. maximizing internal economic linkages where possible, widespread local employment, and maximizing the use of regional and national foodstuffs to support the country’s tourism industry. On the other hand however, and as this thesis will reveal, Communism works in direct opposition to the adoption of many pro-poor practices.