Exploring the Potential Application of Brownfield Redevelopment in Dalian, China, Based on Municipal Experiences in Ontario, Canada 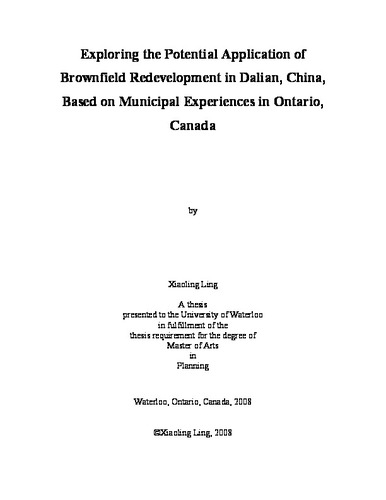 This study explores the potential of applying Canadian experiences of brownfield redevelopment to Chinese practices by investigating three cases: City of Kitchener, City of Hamilton and City of Dalian. Data collection methods in this research contain interviews, on-site observations and document collection and review. Both Kitchener and Hamilton have achieved considerable success in redeveloping brownfields largely due to government’s persistent commitment, various financial incentives through CIP, effective marketing efforts, and good public-private partnerships. These factors are regarded as successful municipal experiences based on the assumption that all municipal programs/approaches should be considered “successful” if the redevelopment occurs as opposed to the no-action alternative. Brownfields in Dalian are being formed, purchased and redeveloped in a different way from their Canadian counterparts. Dalian confronts different challenges such as high environmental risks and lacking detailed historic site information and community support. After comparing Canadian and Chinese practices, the study concludes that the successful municipal experiences of Kitchener and Hamilton are meaningful references to Dalian’s practice. Especially, public-private partnerships, marketing of brownfield programs and brownfield coordinators can help Dalian to create community support, improve the regulatory environment, and reshape the City’s public image. The SSRA approach used in Canada to develop appropriate clean-up criteria for a brownfield site may also be a useful technique for Dalian. Nevertheless, upper levels of Chinese government must take hard efforts in rule-making, regulating and planning in order to maintain economic growth while at the same time ensuring public safety/health in brownfield redevelopment. In addition, the researcher raises several constructive suggestions to China’s brownfield practice based on key findings from the field research.