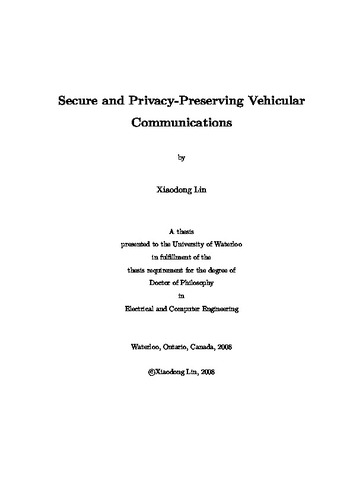 Road safety has been drawing increasing attention in the public, and has been subject to extensive efforts from both industry and academia in mitigating the impact of traffic accidents. Recent advances in wireless technology promise new approaches to facilitating road safety and traffic management, where each vehicle (or referred to as On-board unit (OBU)) is allowed to communicate with each other as well as with Roadside units (RSUs), which are located in some critical sections of the road, such as a traffic light, an intersection, and a stop sign. With the OBUs and RSUs, a self-organized network, called Vehicular Ad Hoc Network (VANET), can thus be formed. Unfortunately, VANETs have faced various security threats and privacy concerns, which would jeopardize the public safety and become the main barrier to the acceptance of such a new technology. Hence, addressing security and privacy issues is a prerequisite for a market-ready VANET. Although many studies have recently addressed a significant amount of efforts in solving the related problems, few of the studies has taken the scalability issues into consideration. When the traffic density is getting large, a vehicle may become unable to verify the authenticity of the messages sent by its neighbors in a timely manner, which may result in message loss so that public safety may be at risk. Communication overhead is another issue that has not been well addressed in previously reported studies. Many efforts have been made in recent years in achieving efficient broadcast source authentication and data integrity by using fast symmetric cryptography. However, the dynamic nature of VANETs makes it very challenging in the applicability of these symmetric cryptography-based protocols. In this research, we propose a novel Secure and Efficient RSU-aided Privacy Preservation Protocol, called SERP^3, in order to achieve efficient secure and privacy-preserving Inter-Vehicle Communications (IVCs). With the commitments of one-way key chains distributed to vehicles by RSUs, a vehicle can effectively authenticate any received message from vehicles nearby even in the presence of frequent change of its neighborship. Compared with previously reported public key infrastructure (PKI)-based packet authentication protocols for security and privacy, the proposed protocol not only retains the security and privacy preservation properties, but also has less packet loss ratio and lower communication overhead, especially when the road traffic is heavy. Therefore, the protocol solves the scalability and communication overhead issues, while maintaining acceptable packet latency. However, RSU may not exist in some situations, for example, in the early stage deployment phase of VANET, where unfortunately, SERP^3 is not suitable. Thus, we propose a complementary Efficient and Cooperative Message Validation Protocol, called ECMVP, where each vehicle probabilistically validates a certain percentage of its received messages based on its own computing capacity and then reports any invalid messages detected by it. Since the ultimate goal of designing VANET is to develop vehicle safety/non-safety related applications to improve road safety and facilitate traffic management, two vehicle applications are further proposed in the research to exploit the advantages of vehicular communications. First, a novel vehicle safety application for achieving a secure road traffic control system in VANETs is developed. The proposed application helps circumvent vehicles safely and securely through the areas in any abnormal situation, such as a car crash scene, while ensuring the security and privacy of the drivers from various threats. It not only enhances traveler safety but also minimizes capacity restrictions due to any unusual situation. Second, the dissertation investigates a novel mobile payment system for highway toll collection by way of vehicular communications, which addresses all the issues in the currently existing toll collection technologies.