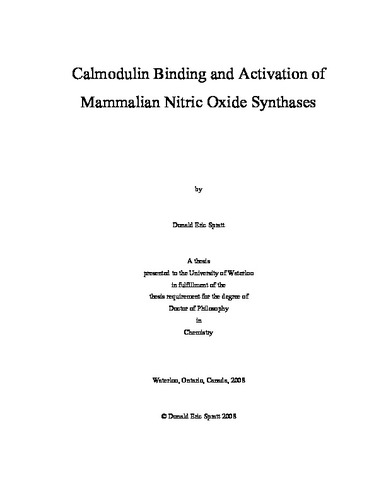 Calmodulin (CaM) is a ubiquitous cytosolic Ca2+-binding protein involved in the binding and regulation of more than three-hundred intracellular target proteins. CaM consists of two globular domains joined by a central linker region. In the archetypical model of CaM binding to a target protein, the Ca2+-replete CaM wraps its two domains around a single α-helical target peptide; however, other conformations of CaM bound to target peptides and proteins have recently been discovered. Due to its ability to bind and affect many different intracellular processes, there is significant interest in a better understanding of the structural and conformational basis of CaM’s ability to bind and recognize target proteins. The mammalian nitric oxide synthase (NOS) enzymes are bound and activated by CaM. The NOS enzymes catalyze the production of nitric oxide (•NO), a free radical involved in numerous intercellular processes such as neurotransmission, vasodilation, and immune defense. There are three different isoforms of nitric oxide synthase (NOS) found in mammals – neuronal NOS (nNOS), endothelial NOS (eNOS), and inducible NOS (iNOS). All three enzymes are homodimeric with each monomer consisting of an N-terminal oxygenase domain and a multidomain C-terminal reductase domain. A CaM-binding domain separates the oxygenase and reductase domains. There is a unique opportunity to investigate CaM’s control over •NO production by the NOS enzymes since each isoform shows a different mode of activation and control by CaM. At elevated cellular Ca2+ concentrations, CaM is able to bind and activate nNOS and eNOS. In contrast, the iNOS isozyme is transcriptionally regulated and binds to CaM in the absence of Ca2+. The focus of this thesis is to better our present understanding of the conformational and structural basis for CaM’s ability to bind and activate the three mammalian NOS isozymes with particular emphasis on the interactions between CaM and iNOS. To further investigate the differences in the association of CaM to the Ca2+-dependent and Ca2+-independent NOS isoforms, a variety of CaM mutants including CaM-troponin C chimeras, CaM EF hand pair proteins, and CaM mutants incapable of binding to Ca2+ were employed. The inherent differences in binding and activation observed using these CaM mutants is described. Differences in the binding of the N- and C-terminal domains, as well as the central linker of CaM to peptides corresponding to the CaM-binding domain of each NOS enzyme and holo-NOS enzymes was investigated. The conformation of CaM when bound to NOS peptides and holo-NOS enzymes was also studied using fluorescence (Förster) resonance energy transfer (FRET). A preliminary three-dimensional structural study of Ca2+-replete and Ca2+-deplete CaM in complex with an iNOS CaM-binding domain peptide is also described. Combining the cumulative results in this thesis, a working model for iNOS’s regulation by CaM is proposed. Future suggested experiments are described to further the characterization of CaM binding to the NOS enzymes and other CaM-target proteins. The studies described in this thesis have expanded and improved the present understanding of the CaM-dependent binding and activation of the NOS isozymes, particularly the interactions between CaM and iNOS.