Geology, geochemistry and Cr-Ni-Cu-PGE mineralization of the Bird River sill: Evidence for a multiple intrusion model 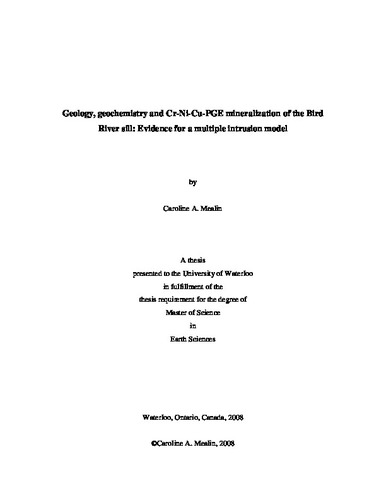 The Bird River sill (BRS) is composed of layered mafic-ultramafic intrusive bodies which intruded the Bird River greenstone belt in southeastern Manitoba. Layered intrusions, such as those that collectively make-up the BRS, are important hosts to base and precious metal deposits. This study was initiated to examine and develop an emplacement model for the western half of the BRS and to establish the controls on Cr-Ni-Cu-PGE mineralization. The BRS intrusions were emplaced through multiple-magmatic injections into different stratigraphic levels in the Lamprey Falls Formation. It is interpreted that the central BRS intrusions are connected and represent a single conduit system. The BRS and the Lamprey Falls Formation are overlain by the metasedimentary rocks of the Peterson Creek Formation and are overturned. The stratigraphy of the BRS is divided into four series which are from the base upwards: 1) marginal mafic series, 2) ultramafic series, 3) transition series, and 4) mafic series. All significant concentrations of Cr-Ni-Cu-PGE are contained in the ultramafic series. Mineralization is magmatic in origin with significant Ni-Cu and PGE remobilization associated with late felsic magmatism. Ni-Cu remobilization is also associated with mineralized shear zones that cross-cut the BRS and Lamprey Falls Formation. The sulphur source could not be determined unambiguously based on sulphur isotopes alone but the δ34S values of the BRS intrusions suggests that the sulphur in the BRS is magmatic in origin and that two of the BRS bodies may have assimilated external sulphur. The findings of this investigation have considerable economic implications. The model that each BRS body is an individual intrusion implies each body may contain its own style of mineralization. Secondly, the Page body of the BRS is interpreted to represent a turbulent magmatic environment and to be the first intrusion to form at the lowest stratigraphic level. The magmas that formed the stratigraphically higher BRS intrusions are believed to have passed through the Page intrusion. Therefore, the Page body is an excellent exploration target as it represents a turbulent environment in which significant amounts of primitive magma have passed through which are two key factors in the formation of Ni-Cu-PGE deposits.