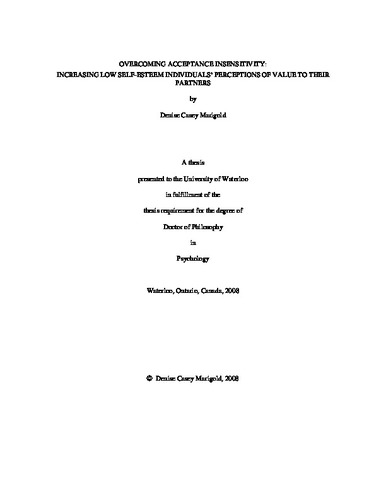 People with low self-esteem (LSEs) often have doubts about how much their romantic partners love and value them. These doubts, which undermine their relationships, are difficult to overcome because LSEs tend to downplay the meaning of positive behaviour and resist positive feedback from their partners. In Study 1, I provided evidence for the notion that LSEs’ “insensitivity” to acceptance is a form of motivated self-protection, rather than a pervasive negative bias. In Studies 2-4, I investigated whether LSEs could be induced to take their partners’ kind words to heart by manipulating how abstractly they described a recent compliment. LSEs felt more positively about the compliments, themselves, and their relationships – as positively as HSEs felt – when they were encouraged to describe the meaning and significance of the compliments. The positive effects of this abstract reframing intervention were still evident two weeks later, in both participants’ self-reported thoughts and feelings about their relationships and in partners’ reports of participants’ behaviour towards them. Study 5 demonstrated that the abstract reframing intervention prevented LSEs from taking a relationship threat to heart and lashing out at their partners. Taken together, the present studies show that when prompted to reframe affirmations from their partners, LSEs feel just as secure and satisfied with their romantic relationships and behave as positively towards their partners as HSEs do.