COMPARISON OF MICRODIALYSIS WITH SOLID-PHASE MICROEXTRACTION FOR IN VIVO STUDY 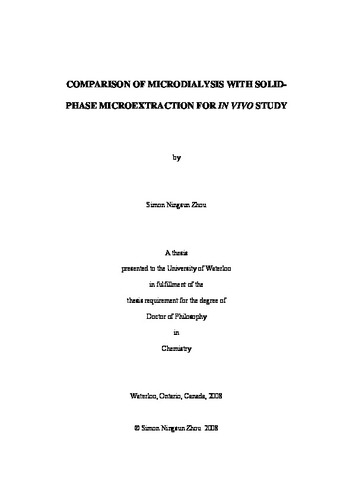 Although microdialysis (MD) and solid-phase microextraction (SPME) are widely used sampling techniques, a comparison study has not been performed to date. The goal of the research presented was not only to address this issue but also to develop new analytical methods that were more suitable for in vivo study using MD and SPME. A new calibration method called kinetic microdialysis was developed for in vivo sampling. Two MD probes with different flow rates were simultaneously inserted into the symmetric parts of sampling system. A simple empirical equation was proposed to calculate the analyte concentrations in the sample matrix using two different dialysate concentrations. Several factors that influenced the correction factor in this equation were discussed. An excellent correlation was observed between the calculated and theoretical value. This method was subsequently applied for in vivo sampling, for the measurement of pesticide allocation in the different leaves of a jade plant (Crassula ovata). Compared to the other reported MD calibration methods, this novel approach offers several advantages including simplicity, speed, robustness, and increased accuracy. The on-fiber standardization technique for solid-coated SPME was studied and a theoretical model is proposed for the isotropic behavior of adsorption and desorption, based on Fick’s law of diffusion and the Langmuir model. The isotropy of the adsorption and desorption of analytes onto and from the surface of porous solid SPME fiber was validated with the use of a commercially available fiber, a 50 um carbowax/templated resin (CW/TPR) for carbamate pesticide analysis in various in vitro sample matrices. Time constants were comparable for the adsorption and desorption processes. Equilibrium constants and fiber capacities were calculated with the Langmuir Isotherm Model. A kinetic method was developed to calibrate adsorption using desorption. This calibration corrected for the sample matrix effects and minimized displacement effects as a pre-equilibrium extraction. The technique was successfully applied to the analysis of pesticides in river water and white wine. This developed method could be potentially applied for in vivo study. A new kinetic calibration was developed using dominant pre-equilibrium desorption by SPME. The calibration was based on isotropism between absorption and desorption, which was proved theoretically and experimentally in an aqueous solution and semi-solid matrix. This approach allows for the calibration of absorption using desorption to compensate for matrix effects. Moreover, concentration profiles are initially proposed to verify isotropism between the absorption and desorption, while providing a linear approach to obtain time constants for the purpose of quantitative analysis. This linear approach is more convenient, robust and accurate than the non-linear version with the previously used time profiles. Furthermore, the target analytes are used as the internal standards, thus radioactive or deuterated internal standards are not necessary. In addition, dominant pre-equilibrium desorption utilizes the pre-equilibrium approach and offers a shorter sample preparation time, which is typically suitable for in vivo sampling. This kinetic calibration method was successfully applied to prepare samples of polycyclic aromatic hydrocarbons (PAHs) in a flow-through system and in vivo pesticide sampling in a jade plant (Crassula ovata). Previous field studies utilizing SPME predominantly focused on volatile compounds in air or water. Earlier in vivo sampling studies utilizing SPME were limited to liquid matrices, namely blood. In this study, SPME was developed for in vivo laboratory and field sampling of pharmaceuticals in fish muscle. Pre-equilibrium extraction was used to shorten in vivo sampling time. The use of pre-equilibrium desorption rates are proposed as a means to calibrate pre-equilibrium extractions. Excellent linearity was found between the free concentrations determined by SPME from the muscle of living fish and the waterborne concentrations of several pharmaceuticals. It is also firstly proposed a simple SPME method to determine free and total concentrations simultaneously in a living tissue using the known protein binding value. The utility of in vivo SPME sampling under field conditions was evaluated in wild fish collected from a number of different river locations under varying degrees of influence from municipal wastewater effluents. Diphenhydramine and diltiazem were detected in the muscle of fish downstream of a local wastewater treatment plant. Based on this study, SPME technique has demonstrated several important advantages for laboratory and field in vivo sampling. The development of a rapid, robust, easy to deploy technique which combines sampling, extraction and concentration into one step is a potentially important tool for use in vivo field-based sampling. MD and SPME methods have been developed and compared through in vitro and in vivo study. For in vitro study (juice, milk and orange jelly), both methods offered accurate and precise results (recovery: 88-105% with RSD < 15%) for complex sample matrices by standard addition method. The limits of quantification (LOQs) of the two methods developed were below the tolerance levels in milk set by the United Nations Food and Agriculture Organization (FAO). Compared to MD, the fully automated SPME procedure offered several advantages including high-throughput and more efficient sampling, less labor intensity, and capability for batch analysis. For in vivo study, kinetic calibrations were performed using retrodialysis and in-fiber standardization techniques for MD and SPME, respectively. Quantitative analysis was performed to measure pesticide concentrations in living tissue, i.e., the leaves of a living jade plant (Crassula ovata). Although both techniques provided sampling with minimal perturbation to the system under study, SPME was more sensitive, precise and accurate, suitable for field sampling and had a wider application than MD. It demonstrated that SPME has the potential to replace MD for in vivo study.