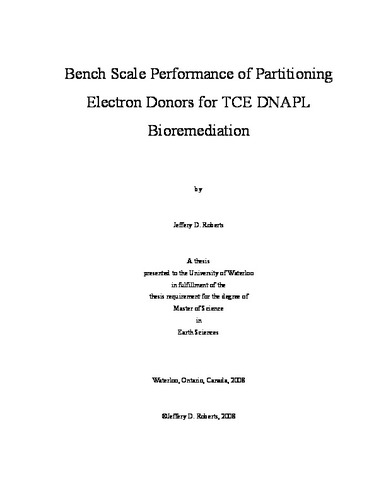 Prior to the implementation of an enhanced bioremediation pilot study for a trichloroethene (TCE) source area at an industrial site in the United Kingdom (the Site), laboratory microcosm and column studies were performed. The purpose of this column study was to determine if TCE removal rates could be increased with the addition of partitioning electron donors and bioaugmentation with KB-1® culture. Three 1-meter continuous flow columns were constructed using aquifer solids from the Site and artificial groundwater. A TCE dense non-aqueous phase liquid (DNAPL) zone was emplaced in each column. SRS™, a commercially available emulsified vegetable oil (EVO) product, and n-butyl acetate (nBA) were evaluated as partitioning electron donors, while the third column acted as an unamended control. Both nBA and SRSTM were successfully used in previous microcosm studies with high concentrations of TCE (400 and 800 mg/L) to successfully promote the reductive dechlorination of TCE to ethene. Dechlorination of TCE to cis-1,2-dichloroethene (cis-DCE) with trace amounts of vinyl chloride (VC) and ethene, as well as sulfate reduction, were observed in the SRSTM column effluent while DNAPL was present. A dissolution enhancement factor of 2.1 was calculated. The TCE source zone was depleted after approximately 300 days of column operation. Following depletion of the TCE DNAPL, high concentration (~400 mg/L) of TCE amended artificial groundwater was pumped through the column to simulate high TCE concentrations in a plume down gradient from a source zone. Dechlorination of TCE via cis-DCE and VC to ethene was observed in the column effluent along with increases in Dehalococcoides (Dhc) counts. Sulfate concentrations increased during the plume phase while dechlorination to ethene still occurred indicating that complete dechlorination to ethene was possible in the presence of sulfate. Dechlorination of TCE to cis-DCE was observed, but neither VC nor ethene was detected in the nBA Amended column. The nBA was observed to degrade in the column to butyl alcohol and acetate, neither of which partition as strongly as nBA, and were not retained in the column. A continuous addition of nBA promoted the highest amount of cis-DCE production and sulfate reduction was also observed. Once the continuous addition was stopped, dechlorination and sulfate reduction halted indicating that electron donor retention in the column was not achieved. Dehalococcoides (Dhc) concentrations did not increase in the effluent of this column. A dissolution enhancement factor of 1.2 was calculated for the nBA column.