Design, Modeling, and Analysis for MAC Protocols in Ultra-wideband Networks 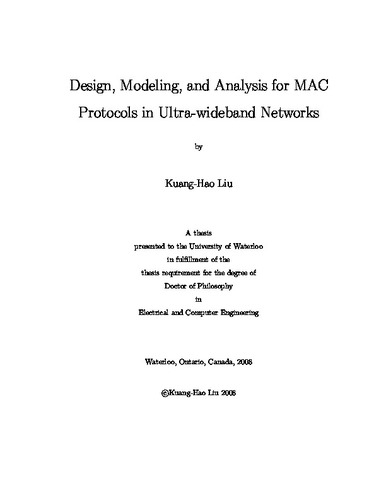 Ultra-wideband (UWB) is an appealing transmission technology for short-range, bandwidth demanded wireless communications. With the data rate of several hundred megabits per second, UWB demonstrates great potential in supporting multimedia streams such as high-definition television (HDTV), voice over Internet Protocol (VoIP), and console gaming in office or home networks, known as the wireless personal area network (WPAN). While vast research effort has been made on the physical layer issues of UWB, the corresponding medium access control (MAC) protocols that exploit UWB technology have not been well developed. Given an extremely wide bandwidth of UWB, a fundamental problem on how to manage multiple users to efficiently utilize the bandwidth is a MAC design issue. Without explicitly considering the physical properties of UWB, existing MAC protocols are not optimized for UWB-based networks. In addition, the limited processing capability of UWB devices poses challenges to the design of low-complexity MAC protocols. In this thesis, we comprehensively investigate the MAC protocols for UWB networks. The objective is to link the physical characteristics of UWB with the MAC protocols to fully exploit its advantage. We consider two themes: centralized and distributed UWB networks. For centralized networks, the most critical issue surrounding the MAC protocol is the resource allocation with fairness and quality of service (QoS) provisioning. We address this issue by breaking down into two scenarios: homogeneous and heterogeneous network configurations. In the homogeneous case, users have the same bandwidth requirement, and the objective of resource allocation is to maximize the network throughput. In the heterogeneous case, users have different bandwidth requirements, and the objective of resource allocation is to provide differentiated services. For both design objectives, the optimal scheduling problem is NP-hard. Our contributions lie in the development of low-complexity scheduling algorithms that fully exploit the characteristics of UWB. For distributed networks, the MAC becomes node-based problems, rather than link-based problems as in centralized networks. Each node either contends for channel access or reserves transmission opportunity through negotiation. We investigate two representative protocols that have been adopted in the WiMedia specification for future UWB-based WPANs. One is a contention-based protocol called prioritized channel access (PCA), which employs the same mechanisms as the enhanced distributed channel access (EDCA) in IEEE 802.11e for providing differentiated services. The other is a reservation-based protocol called distributed reservation protocol (DRP), which allows time slots to be reserved in a distributed manner. Our goal is to identify the capabilities of these two protocols in supporting multimedia applications for UWB networks. To achieve this, we develop analytical models and conduct detailed analysis for respective protocols. The proposed analytical models have several merits. They are accurate and provide close-form expressions with low computational effort. Through a cross-layer approach, our analytical models can capture the near-realistic protocol behaviors, thus useful insights into the protocol can be obtained to improve or fine-tune the protocol operations. The proposed models can also be readily extended to incorporate more sophisticated considerations, which should benefit future UWB network design.