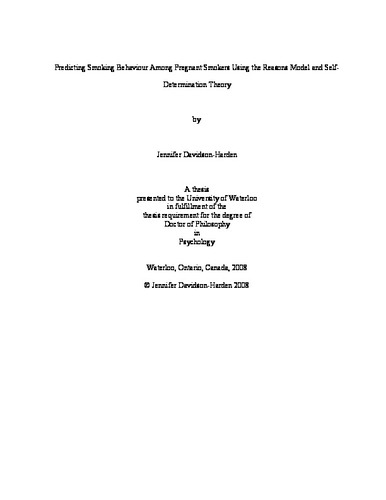 The dangerous health effects of smoking during pregnancy and during the postpartum period are well-established, yet a significant proportion of pregnant women continue to smoke despite being aware of the health risks and wanting to quit. While many risks factors for continued smoking or relapse have been identified, these factors are largely demographic and difficult to change. The purpose of the present study was to identify and measure the psychological factors that predict smoking cessation intentions and behaviours among pregnant women, during pregnancy and the postpartum period, who are either currently smoking or have recently quit. Pregnant smokers (N= 56) were asked to complete a series of questionnaires designed to access their reasoning at the three levels outlined by the Reasons Model and their feelings of autonomy and competence, and partner support in quitting smoking as indicated by Self-Determination Theory. Participants were also asked to complete a number of other questionnaires and a short, semi-structured interview to assess other factors potentially related to smoking behaviour. Participants were then re-contacted twice after their baby was born, at approximately two months and four months postpartum. At both times, participants were asked to again complete the questionnaire package and a short semi-structured interview. It was hypothesized that Reasons Model and Self-Determination Theory would predict both current and future intentions to quit smoking, and smoking behaviour, respectively. It was also hypothesized that those with direct experience with quitting smoking or reducing their smoking behaviour during pregnancy and postpartum (multigravida) would be more accurate in predicting their intentions to quit smoking and smoking behaviour than would those who were pregnant for the first time (primagravida). The results indicated some support for the ability of the two models to predict intentions to quit and smoking behaviour, though was limited by the small sample size. Further, level of direct experience emerged as a significant factor in participants’ ability to predict their intentions and behaviour regarding smoking. The current study suggests that both the Reasons Model and Self-Determination Theory are important tools for assessing and developing interventions for helping women to make positive changes in their smoking behaviour during pregnancy and postpartum.