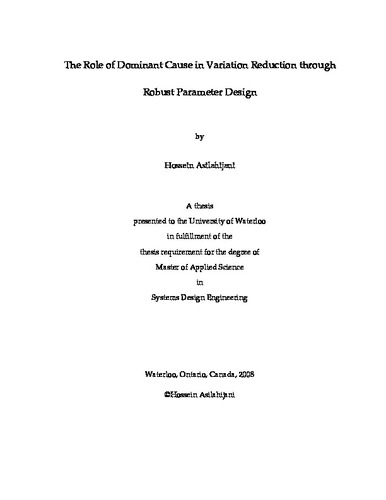 Reducing variation in key product features is a very important goal in process improvement. Finding and trying to control the cause(s) of variation is one way to reduce variability, but is not cost effective or even possible in some situations. In such cases, Robust Parameter Design (RPD) is an alternative. The goal in RPD is to reduce variation by reducing the sensitivity of the process to the sources of variation, rather than controlling these sources directly. That is, the goal is to find levels of the control inputs that minimize the output variation imposed on the process via the noise variables (causes). In the literature, a variety of experimental plans have been proposed for RPD, including Robustness, Desensitization and Taguchi’s method. In this thesis, the efficiency of the alternative plans is compared in the situation where the most important source of variation, called the “Dominant Cause”, is known. It is shown that desensitization is the most appropriate approach for applying the RPD method to an existing process.

Hossein Asilahijani (2008). The Role of Dominant Cause in Variation Reduction through Robust Parameter Design. UWSpace. http://hdl.handle.net/10012/3632