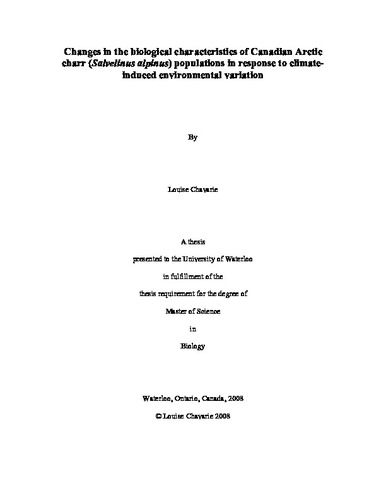 Abstract The thesis includes two studies of Arctic charr, Salvelinus alpinus, responses to climate variation. In the first chapter, site-specific data from a fishery on the Hornaday River, Northwest Territories (NWT), are used to make inferences about the environmental drivers of observed variation in the mean biological characteristics of the catch. Mean length and weight characteristics of subsistence-fished Arctic charr available from 15 years of monitoring on the Hornaday River, were significantly influenced by among-year differences in local summer temperature and/or precipitation patterns. Environmental influences on mean length were age-specific, with temperature being the most important influence on younger (age-5) fish and precipitation being the most important influence on older (age-8) fish. Mean weight was positively influenced by precipitation only. Significant models of length-temperature relationships further indicated that larger mean sizes occurred in years when average summer air temperatures ranged from 6.7-7.1ºC. The effects of precipitation on nutrient exports to the nearshore marine area appear to trigger many of the observed correlations. Overall, results suggest that the large-scale environmental changes predicted by climate change scenarios will hold significant implications for Arctic charr from the Hornaday River, with population-specific effects likely to be exhibited in other northern Arctic charr populations. The second chapter uses archival biological data on 67 anadromous and lacustrine charr populations from eastern North America to assess variation within and among populations of Arctic charr as a function of latitude. Eastern North America was defined to include areas east of 80° W, including: Maine, the Canadian Maritime Provinces, insular Newfoundland, Labrador, Québec, and the eastern Arctic Islands of Baffin, Devon and Ellesmere. Obtained population data sets contained individual observations on age, length, weight, sex and fecundity of Arctic charr from as many age-classes as possible and included sufficient life-history information to permit grouping populations to life-history types: dwarf lacustrine, normal lacustrine and anadromous. Data were used to determine the significance of latitudinal clines in the biological responses as explanations of variation in age-specific biological characteristics (length and growth rate) among populations and life-history-types. The presence of a gradient in temperature and growing season length across latitudes was significantly related to a latitudinal compensation in the growth rate of all age-classes of normal and dwarf lacustrine Arctic charr populations. No decrease in dwarf length-at-age along the gradient was noted, whereas normal lacustrine length-at-age in the younger ages (age-4 to age-6) declined along the gradient. Results provide evidence of the applicability of the countergradient hypothesis as an explanation of among population differences in length-at-age for normal and dwarf lacustrine Arctic charr. Only weak evidence of the applicability of the countergradient hypothesis to anadromous Arctic charr populations was found. Although a decrease in length-at-age for all age-classes was observed along the gradient, only four age-classes (age-10 to age-13) showed a significant increase in growth rate with an increase in latitude. The similarity of the marine thermal environment across the latitudinal gradient is argued to account for the differential response of anadromous Arctic charr in comparison to lacustrine populations.