Koblitz's Conjecture for the Drinfeld Module 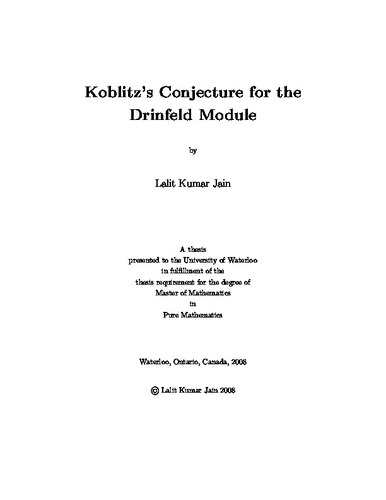 Let $E$ be an elliptic curve over the rationals without complex multiplication such that any elliptic curve $\mathbb{Q}$-isogenous to $E$ has trivial $\mathbb{Q}$-torsion. Koblitz conjectured that the number of primes less than $x$ for which $|E(\mathbb{F}_p)|$ is prime is asymptotic to $$C_E\frac{x}{(\log{x})^2} $$ for $C_E$ some constant dependent on $E.$ Miri and Murty showed that for infinitely many $p,$ $|E(\mathbb{F}_p)|$ has at most 16 prime factors using the lower bound sieve and assuming the Generalized Riemann Hypothesis. This thesis generalizes Koblitz's conjectures to a function field setting through Drinfeld modules. Let $\phi$ be a Drinfeld module of rank 2, and $\mathbb{F}_q$ a finite field with every $\mathbb{F}_q[t]$-isogeny having no $\mathbb{F}_q[t]$-torsion points and with $\text{End}_{\overline{k}}(\phi)=\mathbb{F}_q[t].$ Furthermore assume that for each monic irreducible $l\in \mathbb{F}_q[t],$ the extension generated by adjoining the $l$-torsion points of $\phi$ to $\mathbb{F}_q(t)$ is geometric. Then there exists a positive constant $C_{\phi}$ depending on $\phi$ such that there are more than $$ C_{\phi}\frac{q^x}{x^2}$$ monic irreducible polynomials $P$ with degree less then $x$ such that $\chi_{\phi}(P)$ has at most 13 prime factors. To prove this result we develop the theory of Drinfeld modules and a translation of the lower bound sieve to function fields.