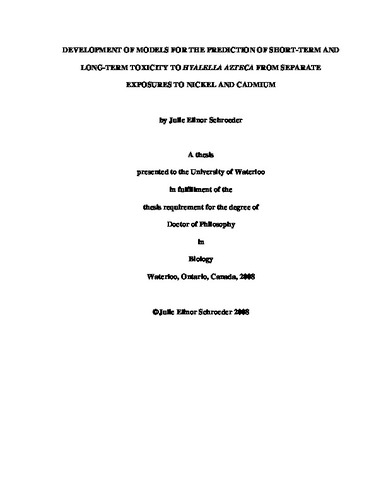 This study investigated whether principles of the Biotic Ligand Model (BLM), originally developed to predict acute metal toxicity to fish, may be applied to metal accumulation and toxicity in short-term and long-term exposures of Hyalella azteca, an epibenthic invertebrate. In both short-term and long-term exposures, hydrogen and calcium were the only cations found to significantly influence nickel accumulation and toxicity, although some influence by magnesium was suggested in solutions of low calcium and alkalinity. Analysis of short-term (seven-day) bioaccumulation and long-term (28-day) toxicity data established three potential models to explain the observed accumulation and/or toxicity. One of the models included calcium and hydrogen as competitors to nickel (consistent with BLM theory), while the other two models incorporated the non-competitive effect of calcium on the biotic ligand in addition to, or instead of, the competitive action of calcium (not currently considered by BLM theory). Short-term accumulation observed in the tests with adults was best predicted by the competitive (BLM-type) model. However, long-term accumulation and toxicity were predicted equally well by both competitive and non-competitive models. In short-term cadmium exposures the models including calcium as a competitor, rather than an influence on the ligand, predicted accumulation and toxicity best. Hydrogen did not appear to have a significant influence. Although both competitive and non-competitive calcium models were able to predict long-term toxicity within a factor of two of the observed for most tests, the relationship between predicted and observed LC50s was not linear. Instead, for a given calcium concentration, a wide range of LC50s was observed but was associated with a relatively constant predicted LC50 (based on the influence of calcium alone). The predicted LC50s fell roughly in three lateral bands, according to calcium concentrations of approximately 0.3, 1 and 3 mmol/L. The broad range of observed LC50s associated with a relatively constant predicted LC50 reflected variability in organism response in four-week exposures in similar media and/or may have suggested that other factors influencing cadmium toxicity were not accounted for in the models.

Julie Elinor Schroeder (2008). Development of Models for the Prediction of Short-term and Long-term Toxicity to Hyalella azteca from Separate Exposures to Nickel and Cadmium. UWSpace. http://hdl.handle.net/10012/3625