Examining the Neuromuscular and Mechanical Characteristics of the Abdominal Musculature and Connective Tissues: Implications for Stiffening the Lumbar Spine 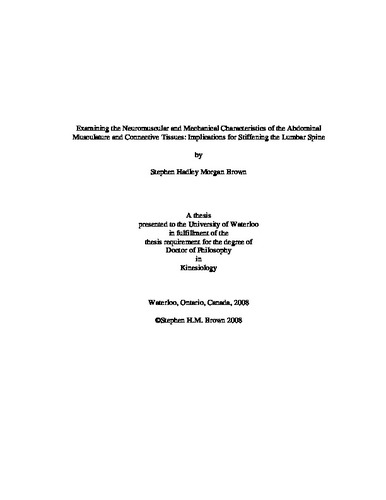 Research has uncovered an essential role of proper abdominal muscle function in ensuring the health and integrity of the lumbar spine. The anatomical arrangement of the abdominal musculature (rectus abdominis, external oblique, internal oblique, transverse abdominis) and intervening connective tissues is unique in the human body. Despite the hypothesized importance and uniqueness of the abdominal muscles, very little research has been directed to understanding their role from a neuro-mechanical standpoint. Thus, this thesis was designed to study the neuro-activation and mechanical characteristics of the abdominal musculature and connective tissues, with a specific focus on torso stiffening mechanisms. Several experiments were performed and unified around this theme. The first study explored the fundamental relationship between EMG muscle activation recordings and the moments generated by the trunk musculature. This study was novel in that investigation of the abdominal musculature was augmented with consideration of antagonist muscle co-activation. The main finding was that the EMG-moment relationships were quite similar in both the abdominal and extensor muscle groups; however, the form of this relationship differed from that often reported in the literature. Specifically, consideration of antagonist muscle moments linearized the EMG-moment relationship of the agonist muscle groups. Once this activation-moment relationship had been established, the next line of questioning explored the association between torso muscle activation, driven through the abdominals, and torso stiffness. Two studies addressed this issue: the first examined the intrinsic resistance of the torso to bending in the flexion, extension, and lateral bend directions, while varying the levels of torso muscle activation; the second examined the response of the trunk to perturbations while varying the levels of torso muscle activation under the presence of limited reflexes. The first of these two studies demonstrated a rise in trunk stiffness as muscle activation increased over the lower 40% of range of motion. At greater ranges of motion in flexion and lateral bend the trunk appeared to become less stiff as the musculature contracted to higher levels. The latter study revealed substantial spinal displacements in response to trunk perturbations, indicating that in the absence of reflex activity, the stiffness produced by muscular contraction may be inadequate to stiffen the torso to prevent damage to spinal tissues. The fourth study was designed to enable in-vivo observation of abdominal muscle and connective tissue deformation using ultrasound imaging. During relatively simple abdominal contractions, the oblique aponeurosis demonstrated surprising deformation patterns that often exhibited the characteristic of a negative Poisson’s ratio. This was hypothesized to be facilitated by the composite laminate arrangement of the abdominal wall, whereby the loose connective tissues separating layers of collagen fibres may allow for separation of adjacent layers, giving the appearance of structural volume expansion. Further, a lateral displacement of the rectus abdominis muscle was noted in a majority of contractions, highlighting the dominance of the laterally oriented forces generated by the oblique muscles. The final study questioned, at a basic level, the nature of the anatomical arrangement of the abdominal muscle-connective tissue network. Examining the contraction of the rat abdominal wall uncovered the transfer of muscularly generated force and stiffness through the connective tissues binding the layered muscles. This suggests a functionality of the abdominal wall as a composite laminate structure, allowing substantial multi-directional stiffness to be generated and transmitted around the torso, thereby enhancing the ability to effectively stabilize the spine.