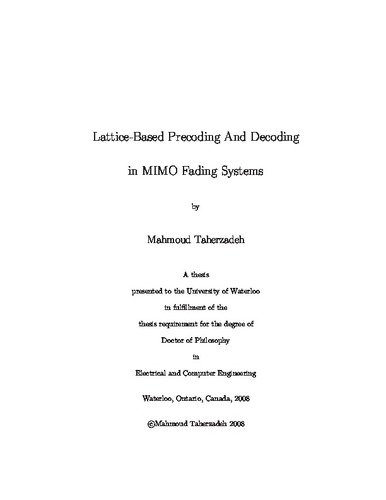 In this thesis, different aspects of lattice-based precoding and decoding for the transmission of digital and analog data over MIMO fading channels are investigated: 1) Lattice-based precoding in MIMO broadcast systems: A new viewpoint for adopting the lattice reduction in communication over MIMO broadcast channels is introduced. Lattice basis reduction helps us to reduce the average transmitted energy by modifying the region which includes the constellation points. The new viewpoint helps us to generalize the idea of lattice-reduction-aided precoding for the case of unequal-rate transmission, and obtain analytic results for the asymptotic behavior of the symbol-error-rate for the lattice-reduction-aided precoding and the perturbation technique. Also, the outage probability for both cases of fixed-rate users and fixed sum-rate is analyzed. It is shown that the lattice-reduction-aided method, using LLL algorithm, achieves the optimum asymptotic slope of symbol-error-rate (called the precoding diversity). 2) Lattice-based decoding in MIMO multiaccess systems and MIMO point-to-point systems: Diversity order and diversity-multiplexing tradeoff are two important measures for the performance of communication systems over MIMO fading channels. For the case of MIMO multiaccess systems (with single-antenna transmitters) or MIMO point-to-point systems with V-BLAST transmission scheme, it is proved that lattice-reduction-aided decoding achieves the maximum receive diversity (which is equal to the number of receive antennas). Also, it is proved that the naive lattice decoding (which discards the out-of-region decoded points) achieves the maximum diversity in V-BLAST systems. On the other hand, the inherent drawbacks of the naive lattice decoding for general MIMO fading systems is investigated. It is shown that using the naive lattice decoding for MIMO systems has considerable deficiencies in terms of the diversity-multiplexing tradeoff. Unlike the case of maximum-likelihood decoding, in this case, even the perfect lattice space-time codes which have the non-vanishing determinant property can not achieve the optimal diversity-multiplexing tradeoff. 3) Lattice-based analog transmission over MIMO fading channels: The problem of finding a delay-limited schemes for sending an analog source over MIMO fading channels is investigated in this part. First, the problem of robust joint source-channel coding over an additive white Gaussian noise channel is investigated. A new scheme is proposed which achieves the optimal slope for the signal-to-distortion-ratio (SDR) curve (unlike the previous known coding schemes). Then, this idea is extended to MIMO channels to construct lattice-based codes for joint source-channel coding over MIMO channels. Also, similar to the diversity-multiplexing tradeoff, the asymptotic performance of MIMO joint source-channel coding schemes is characterized, and a concept called diversity-fidelity tradeoff is introduced in this thesis.