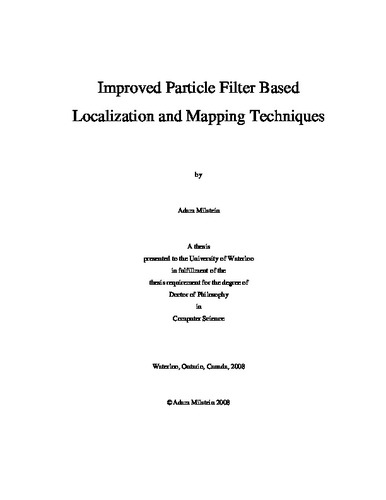 One of the most fundamental problems in mobile robotics is localization. The solution to most problems requires that the robot first determine its location in the environment. Even if the absolute position is not necessary, the robot must know where it is in relation to other objects. Virtually all activities require this preliminary knowledge. Another part of the localization problem is mapping, the robot’s position depends on its representation of the environment. An object’s position cannot be known in isolation, but must be determined in relation to the other objects. A map gives the robot’s understanding of the world around it, allowing localization to provide a position within that representation. The quality of localization thus depends directly on the quality of mapping. When a robot is moving in an unknown environment these problems must be solved simultaneously in a problem called SLAM (Simultaneous Localization and Mapping). Some of the best current techniques for localization and SLAM are based on particle filters which approximate the belief state. Monte Carlo Localization (MCL) is a solution to basic localization, while FastSLAM is used to solve the SLAM problem. Although these techniques are powerful, certain assumptions reduce their effectiveness. In particular, both techniques assume an underlying static environment, as well as certain basic sensor models. Also, MCL applies to the case where the map is entirely known while FastSLAM solves an entirely unknown map. In the case of partial knowledge, MCL cannot succeed while FastSLAM must discard the additional information. My research provides improvements to particle based localization and mapping which overcome some of the problems with these techniques, without reducing the original capabilities of the algorithms. I also extend their application to additional situations and make them more robust to several types of error. The improved solutions allow more accurate localization to be performed, so that robots can be used in additional situations.